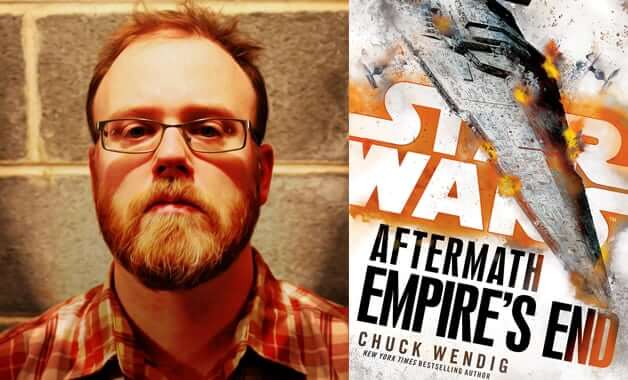 Worry not, there are no spoilers to be found in this article.

The next installment in Lucasfilm’s new Expanded Universe of Star Wars novels comes out next week, and author Chuck Wendig isn’t terribly happy about how many spoilers are leaking via social media and pop-culture news websites.

“Star Wars: Aftermath – Empire’s End” is the final installment of Wendig’s trilogy that takes place immediately after “Return of the Jedi” and details how the Rebel Alliance sweeps up the remaining pieces of the Galactic Empire with the help of a ragtag band of mercenaries.

My position on spoilers is, as a creator and as audience, they are bad and you should feel bad for spoiling stuff in public venues.

There exists a magic trick nature to storytelling. We are magicians who want the audience to experience the trick ‘live,’ as we designed it.

Social media is a public forum. You wouldn’t get on a city bus and announce who died on THE WALKING DEAD this week, so don’t do it here. — Chuck Wendig (@ChuckWendig) February 17, 2017

So, there you go. Don’t spoil stuff. Including my books. Be cautious, be kind, don’t assume everyone sees stories as a series of datapoints.

I personally have to agree with Wendig here, and it seems odd to me that this is only happening with the novels and not the movies. Obviously there were some idiots intentionally spreading spoilers for “Star Wars: The Force Awakens” on social media before it came out, but I found that news sites were in general fairly respectful about guarding the movie’s bigger reveals.

It’s important both to the creators and fans of Star Wars (and any story, really) to maintain the integrity of storytelling and allow viewers / readers to experience the unfolding of events as it was intended, not via a careless tweet or an online news headline. We’ll do our best here at Inside the Magic to adhere to that notion.