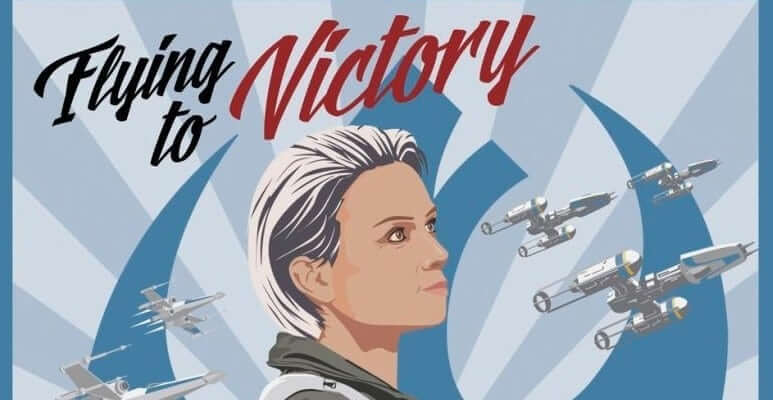 The recent Star Wars tie-in novels have been something of a mixed bag. While the fan uproar over Disney essentially wiping out the existing Star Wars Expanded Universe (after it purchased Lucasfilm back in 2012) was understandable, many devotees of the franchise were also excited about the idea of a fresh start. Sadly, in my opinion only a small amount of what has been delivered in the new book series so far has been truly worthwhile, but that’s neither here nor there.

Regardless of how you feel about “Star Wars: Aftermath” so far, the third and final novel in the post-“Return of the Jedi” trilogy by author Chuck Wendig is due out in just a few weeks. “Empire’s End” is set to wrap up the story of the ragtag group of Rebels who thwarted the Empire’s plans on the planet Akiva and then helped Han Solo and Chewbacca liberate the Wookiees on Kashyyyk.

This week two new promotional posters for “Star Wars: Aftermath – Empire’s End” were released by publisher Del Rey, in conjunction with Lucasfilm. Designed in a “propaganda” style for both the now-splintered Galactic Empire and the fledgling New Republic, the pair of posters depict two characters from the novels, one of which fans had yet to see an officially-sanctioned image.

While the Imperial Grand Admiral Rae Sloane (first image) had appeared a number of Star Wars stories before the “Aftermath” series, this is the first time we’ve gotten a look at Rebel Alliance / New Republic pilot Norra Wexley, hero of the Battle of Endor and mother to future Resistance pilot Temmin “Snap” Wexley, who was portrayed by actor Greg Grunberg in “Star Wars: The Force Awakens”.

Comments Off on PHOTOS: “Empire’s End” promo posters give us visual depictions of two characters from the new Star Wars novels