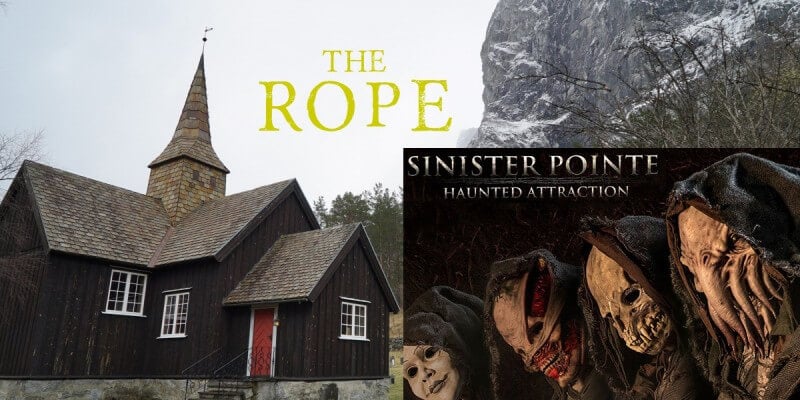 As regular readers of this site know, I’ve been trying to do as many of the local Halloween haunts in Los Angeles (and the surrounding Southern California area) as possible this year. It’s a daunting task, because as I’ve noted, the number of such experiences seems to increase exponentially every time this season rolls around.

With that in mind, I’m going to try something a little bit different in this review. This week I attended two very different, but equally effective Halloween events nearby, and I thought I would give readers the opportunity to compare and contrast the qualities of the two.

Sinister Pointe is most closely recognizable as the latter, but has elements of interactive theater as well. Located in Fullerton, California (about a five-mile, ten-minute drive from Disneyland, its Orange County neighbor) this walkthrough maze features four unique paths, each with its own puzzles and monsters, all unified by the same starting and end points, and with common areas in the middle as well.

Guests at Sinister Pointe begin their journey with a visit to a fortune teller, who reads their future and assigns them one of four tarot cards, each with its own special symbol depicted on it. In the next room, an imposing blacksmith-type character “brands” you with the symbol on either your forehead, cheek, or hand. The symbol then corresponds to the path that you follow as your proceed through the maze.

Each individual path offers up at least one simple escape room-type puzzle that you must solve in order to proceed. And each branch of the journey contains different moments that are guaranteed to creep you out in their own special way.

Sinister Pointe isn’t quite revolutionary, but it is remarkable in its sheer size– it’s one of the biggest independent haunts I’ve been to, area-wise, taking up what is probably a full large-CVS-size storefront in a shopping center. It’s also worth visiting just for the opportunity to interact with the performers, who are some of the most committed and involving scare actors I’ve seen. The set design is fun, the staff is helpful, and the multiple-paths element will have you coming back for more. But beware confined spaces: those of you who suffer from claustrophobia may want to skip this one.

WATCH VIDEO REVIEW OF THE ROPE:

The Rope, located in a desolate area of Downtown Los Angeles, is an entirely different animal from Sinister Pointe. Less a haunted maze and much more an immersive, fully interactive theater experience, the Rope invites you to enter an mystical forest where shadowy figures beckon you to discover another world.

The experience begins in an alley, late at night in one of the more isolated parts of town. Fortunately you’ll have the rest of the party waiting with you, as a hooded figure approaches and begins blindfolding you, one by one, and leading you down the alley and into a drafty freight elevator, where your adventure begins.

Attendees interact with a series of characters, obtaining magical tokens that lead them to the next part of their journey. All the characters’ individual locations are connected by a long rope that runs the length of the entire dimly-lit performance space, creating an eerie but navigable labyrinth through what I can only imagine ordinarily serves as an moderately-sized office space.

Once you have interacted with all the characters, you’re reunited with your fellow participants and the story progresses to the next point. The group is then taken to another location, the reveal of which is the best and most breathtaking moment in the entire production, and the final moments of the tale play out.

The Rope is an ambitious and memorable effort in interactive theater, but it still pales in comparison to the absolute best-in-show entry in this category, the similarly Los Angeles-based Delusion. Nevertheless, the Rope delivers more than a handful of compelling moments, partnered with some impressive world-building. In fact, the storyline is so dense in its fantasy-themed escapism that I sometimes found myself having trouble following it, despite having been forewarned to pay close attention.

In retrospect, I wish I had committed myself to playing along and improvising more, rather than trying to decipher and memorize every word the actors were saying to me. As another attendee told me after the show ended, the more you put into your own role in The Rope, the more you’re likely to get out of it.

Visit the official website for The Rope for tickets and more information.