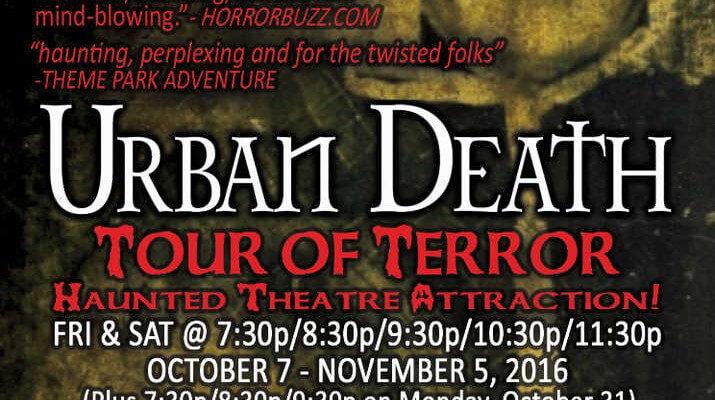 There’s no shortage of Halloween events and haunts in Southern California. And for the most part, fans of the season have come to know what to expect from such events, whether they’re your standard walk-through haunted attraction, interactive theater, or theme park makeover. Considering the proliferation of these attractions around the greater Los Angeles area, it’s a rare treat to find a Halloween event that I would truly call unique.

“Urban Death” has been operating in some form or another at the enigmatic Zombie Joe’s Underground Theatre in North Hollywood for over a decade, but last night at the media preview for their 2016 Hallowen show “Tour of Terror” was my first time experiencing the singular production, and I have to say it made an impression on me.

“Urban Death: Tour of Terror” isn’t so much a haunt as it is a performance-art theatrical exhibition, but it does incorporate a somewhat more traditional maze element. The audience enters the theater through a winding path of suspended plastic sheets, encountering a variety of scare actors along the way. When I first entered I was a little worried that this was all “Urban Death” had to offer, because as an attraction unto itself the design of the maze was a little lackluster, but then we finally arrived at the theater.

Zombie Joe’s Underground is a tiny, minimalist black-box theater situated in the Arts District of North Hollywood, and its unassuming appearance makes for the perfect setting for the striking presentation that followed. Once the audience settled into the performance area, the lights dimmed and the show began. “Urban Death” isn’t a stage play in the conventional sense– it’s more of a series of very short character sketches, most not longer than ten or fifteen seconds, and all of them tied into the broader “horror” theme.

Each sketch features one to four characters, humans, or monsters, creating a tableau that is either scary, weird, or just plain creepy. Sometimes the character is a creature so inhuman-looking that you have trouble figuring out how it’s being created on stage, sometimes the sketch goes for a straightforward jump-scare, and sometimes the scene is disturbing for far more grounded, unsettling reasons.

The show itself lasts about ten to fifteen minutes, and last night it left me with some disconcerting images that I won’t soon be forgetting. After it ends, the audience is once again led out through the maze (this time populated by a different, perhaps more aggressive series of monsters) and then back out onto the street.

As a complete experience, the total running time of “Urban Death: Tour of Terror” is roughly half an hour, and the very affordable $15 admission price reflects the perhaps shorter-than-average length of a theatrical work. Overall, the obvious dedication to the craft, often exhilarating visual artisty, and the sheer amount of effort the cast and creators have put into “Urban Death” makes it worth every penny. “Urban Death: Tour of Terror” runs Fridays and Saturdays from today through November 5th at Zombie Joe’s Underground Theatre in North Hollywood, California. Be sure to visit Zombie Joe’s official website for tickets and more information.