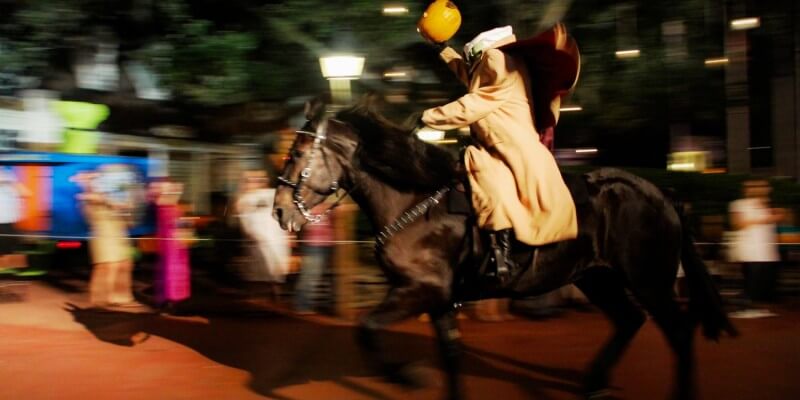 Over the years however, several frightfully fun festivities have gone to the grave. Listed below are five fright fest favorites forever (?) finished?

This 40-foot-tall, 30-ton terror is billed as the world’s largest transformer. This menacing car-crushing creature first lumbered into Universal Orlando Resort’s Halloween Horror Nights in their second year. Thrilling audiences on the streets of New York, Robosaurus made such a crushing impression that the transforming T-Rex made an encore excursion two years later for the fourth year of the event and again at Halloween Horror Nights Sweet 16.  Robosaurus has not been seen at HHN since that the Sweet 16 appearance, but not to worry, the demolition driven dino still makes appearances elsewhere. Keep an eye on the weird wide web for future sightings here.

Festival of the Dead Parade at Halloween Horror Nights

“Mardi Gras meets Halloween” would be an accurate description of the HHN event that’s no longer haunting the party at Universal Studios Orlando Resort.

The streets come alive with hundreds of mutants, monsters and maniacs in this nightmarish processions of ghoulish floats and the walking dead. – Universal.

The parade was first introduced as “the Crypt Keeper’s Festival of the Dead Parade” in 1996. For HHN 7, the Crypt Keeper was replaced with the phrase, “Our Greatest. . .” In 2001 Universal changed the name to “Nightmares on Parade” as they toned down all of that year’s attractions.  2001 was also the last year of the parade for a time, as HHN was moved to Islands of Adventure for two years. The parade made several trips from New York to Hollywood (streets) for the last time in 2004.  Festival of the Dead was replaced with more scare zones; the parade apparently discontinued due to the event’s growing appeal and subsequent crowds.

In 2002 Disney decided to give the Haunted Mansion a party. This merchandise centered event featured a party at the Magic Kingdom (limited to Liberty Square and Frontierland) with special entertainment and refreshments. The event ran for three years and is believed to be the precursor to Mickey’s Not So Scary Halloween Party (elements like the trick or treat trail, ride of the Headless Horseman and other entertainment carried over into Mickey’s party).  Seminars on Haunted Mansion history were offered. A dinner INSIDE the Haunted Mansion gave top tier ticketed guests the ultimate experience, while all were treated the appearance of the Headless Horseman galloping though Liberty Square.  The Cadaver Dans also made special appearances. (For more details of this ultimate party to die for, see the write up on Doombuggies.com)

The Adventurers Club was a staple of Downtown Disney’s Pleasure Island from 1989 until it closed in 2007.  This zany hangout for larger than life adventurers (and guests of Pleasure Island) held “1939 Open House” each night of the 18 years it was open.  Those adventurers (Club President Pamelia Perkins, Treasurer Otis T. Wren, Ichthyologist Fletcher Hodges, Domestic Engineer/Maid (various names), Butler Graves, Aviator Hathaway Browne, Adventuress Samantha Sterling, and Junior Adventurer Emil Bleehall) would be sure to celebrate the holidays with various shows in the club’s library.  The Halloween show was a must see!

Terror on Church Street Block Party to DIE for

Terror on Church Street was a year-round haunted attraction in Downtown Orlando from 1991 through 1999.  The two-story haunt on the corner of Orange and Church attracted crowds from around the world and it would not be uncommon for lines to stretch around the building for long waits to tour the macabre maze.  What does an all year haunt do for Halloween?  Throw a HUGE block party, of course.  That’s exactly what Terror on Church Street would do.  Live bands, creepy characters and adult libations drew festive crowds and expanded the wait for this expired experience for several blocks and hours.  Those who survived agree it was worth the wait.

Epitaph? So there you have it, a fiendishly favored five of finished fall festivals.  But wait there may be more!  It seems that another creepy classic could have gone cold.  Each year Fort Wilderness Campground at the Walt Disney World Resort would offer a holiday (haunted?) hayride.  Tickets, not so mysteriously, vanished rather quickly for this after dark delight. Each night a storyteller would join the jaunt through the woods regaling riders of the story of one Ichabod Crane.  The exciting tale would culminate with a chase – a headless horseman on a black steed eager for a head to chop. Executed with such spooky skill this rider was, that the horse would be known to breathe down the neck of those on the back of the fleeing wagon.  Sadly the tall tale and its players did not make an appearance at the campgrounds last year and is feared dead and buried for 2016.

Did we miss a gruesome gala or happy haunt that’s since departed the land of the living?  Is there a missing Central Florida favorite fall fear that still haunts your heart?  Do share your eerie experience or long lost love in the comments below.