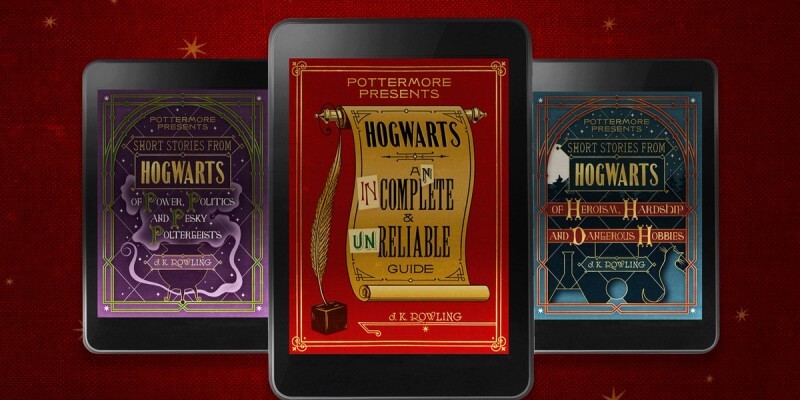 This year has been really good for die-hard Harry Potter fans with both the new ‘Harry Potter and the Cursed Child‘ book being released, the play featuring the same name being performed in London and the thrilling new adventure movie ‘Fantastic Beasts and Where to Find Them‘ premiering later this fall. Yesterday author J.K. Rowling made fans even happier when she announced that she is going to release three new ‘Harry Potter’ eBooks next month.

On the website Pottermore.com the author announced the three new e-books called ‘Pottermore Presents’ which will be released on September 6th. The individual titles will be “Hogwarts: An Incomplete and Unreliable Guide”; “Short Stories from Hogwarts of Power, Political and Pesky Poltergeists”; and “Short Stories from Hogwarts of Heroism, Hardship and Dangerous Hobbies.” The short stories will further explore the universe of Harry Potter and according to the website dig deep into the Harry Potter stories, with titbits taken from Pottermore’s archives and original writing from J.K. Rowling.”

You can already pre-order the three titles!

These stories of power, politics and pesky poltergeists give you a glimpse into the darker side of the wizarding world, revealing the ruthless roots of Professor Umbridge, the lowdown on the Ministers for Magic and the history of the wizarding prison Azkaban. You will also delve deeper into Horace Slughorn’s early years as Potions master at Hogwarts – and his acquaintance with one Tom Marvolo Riddle. These stories of heroism, hardship and dangerous hobbies profile two of the Harry Potter stories’ most courageous and iconic characters: Minerva McGonagall and Remus Lupin. J.K. Rowling also gives us a peek behind the closed curtains of Sybill Trelawney’s life, and you’ll encounter the reckless, magical-beast-loving Silvanus Kettleburn along the way. “Hogwarts: An Incomplete and Unreliable Guide” takes you on a journey to Hogwarts School of Witchcraft and Wizardry. You’ll venture into the Hogwarts grounds, become better acquainted with its more permanent residents, learn more about lessons and discover secrets of the castle . . . all at the turn of a page. Will you be ordering these three new Potter books?