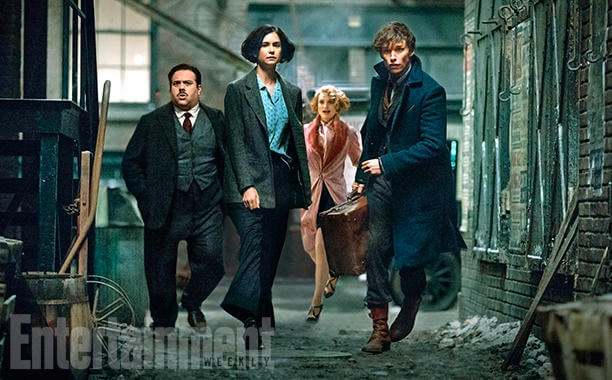 We only have about three months left until we will go hunting with Newt Scamander in New York in J.K. Rowling’s latest project ‘Fantastic Beasts and Where to Find Them’ so more and more teases are coming out about the movie. Entertainment Weekly‘s latest cover features the star from the movie, Eddie Redmayne, and they also revealed a batch of new pictures to go along with it.

In the photos you see Newt on the run with characters Jacob Kowalski, Tina Goldstein and her sister, Queenie. ‘Justice League’ actor Ezra Miller is also revealed as his character Credence Barebone.

Credence is the leader of the witch-hunting organization the New Salem Philanthropic Society in ‘Fantastic Beasts’.

‘Fantastic Beasts and Where to Find Them’ will be released later this year on November 18th.