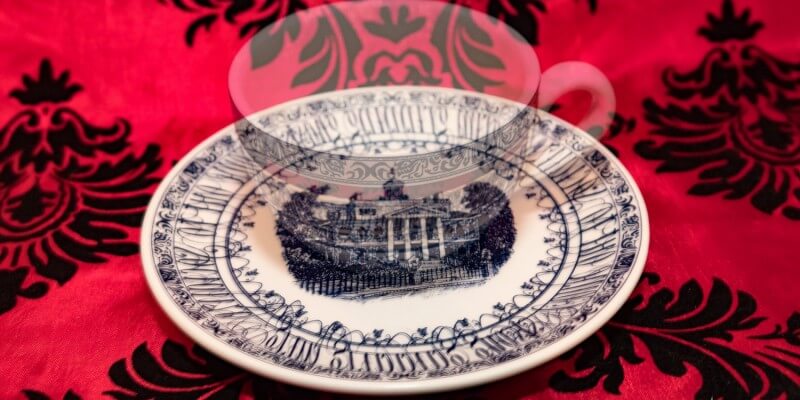 Foolish mortal’s mailboxes were met with mildly macabre materializations as the third and (possibly?) final arrangements of the Haunted Mansion’s “Ghost Posts” were delightfully delivered this week. The instantly sold-out limited subscription service enlisted the aid of the mortal realm in freeing the fettered phantoms of the haunted mansion.

As the story goes, a freak fog enveloped the spirit’s sacred sanctum preventing them from haunting beyond the confines of the haunted mansion. Under the direction of Madame Leota, several eerily enchanted items were rushed to enlisted mortals via three paranormal parcels known as the Ghost Posts.

The interactive items communicated with the spirits via the Phantom Radio (a specially designed iPhone application which was the center piece to the puzzles).  Intricately involved instructions yielded hours of fiendish fun for the fortunate mortals chosen to aid the ghosts.

Click here for Part 1 and Part 2 of our Ghost Post coverage, including the unboxing of the first and second boxes.

West Coast Ghost Fans have the additional opportunity to bring their phantom radio into the Disneyland park for additional interactive ghostly games.  (see also our first fiendish foray into Disneyland)

The third of these otherworldly orchestrated offerings included the ethereally encoded welcome letter from the Ghost Relations Department, another edition of The Grim Gazette,  a saucer (found in the recently discovered Forgotten Room) for the previously issued tea cup, another deck of Madame Leota’s divination cards, a thaumatrope (from the same room), a spirit board, and a ghostly portal. . . 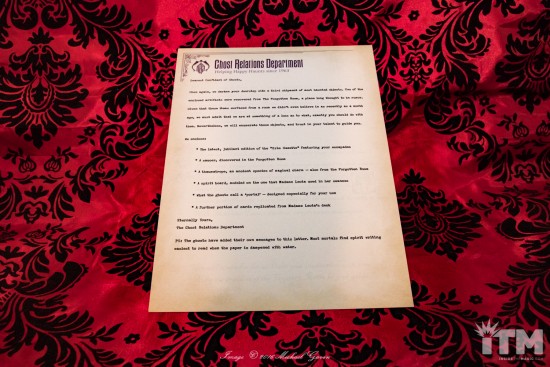 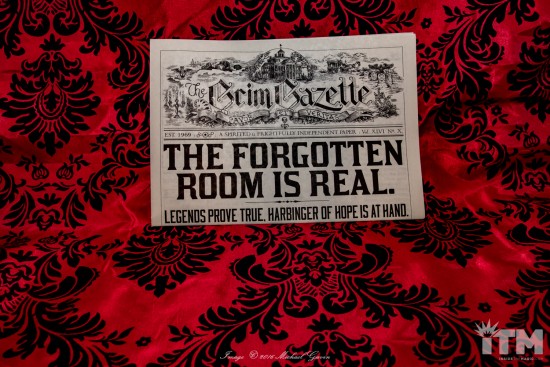 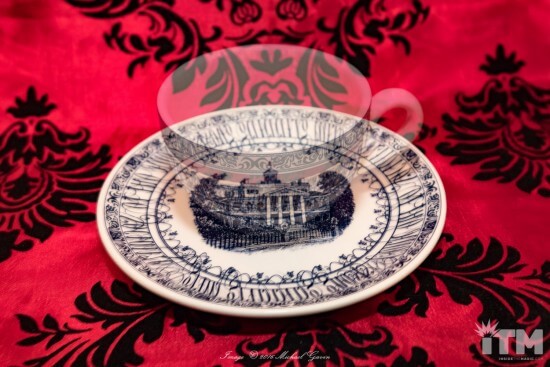 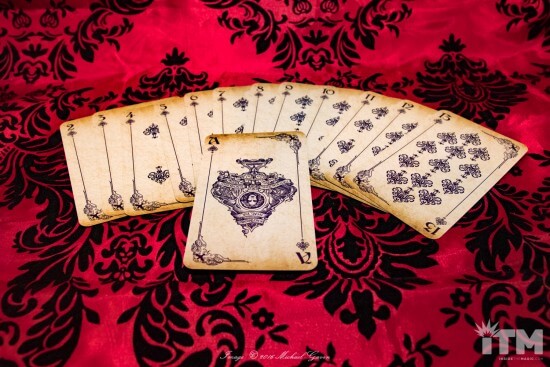 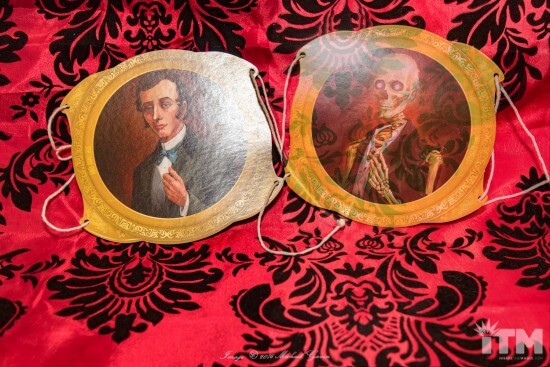 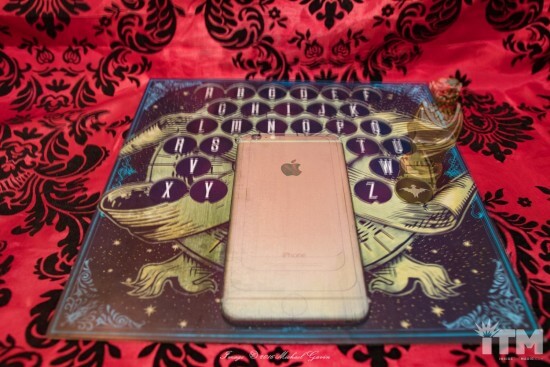 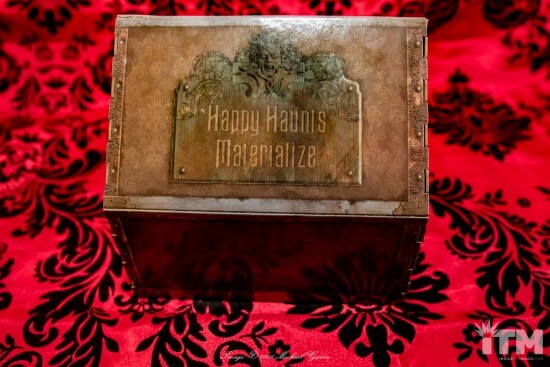 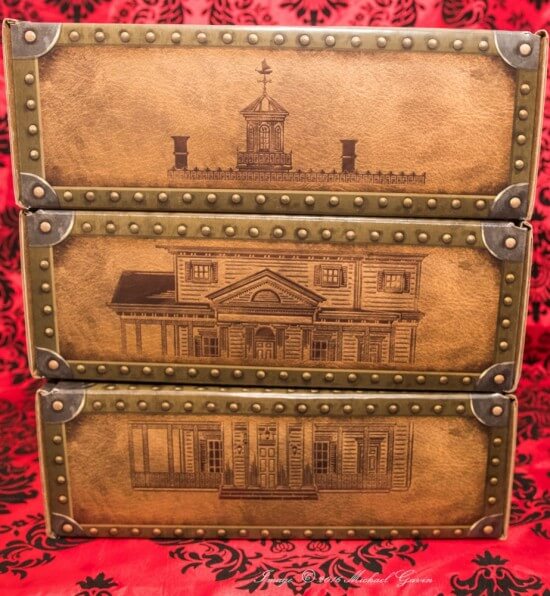 POSSIBLE SPOILER – read on at your own risk. . .

Many subscribers noticed a fourth delivery notation on their subscription (which was advertised as three paranormal packages).  We called the Disney Store to inquire about this curious development.  After some digging (cemetery dirt optional?), our hostess advised us that the powers in charge stated each of the boxes (valued at approximately $50 each) had been sent.  When we pressed the matter noting that it only added up to $150 of the $200 subscription price, we were advised that all three items had been sent (with an obvious omission to the dollar amount reference).
Was this an unintended slip of information?  Could there be another spirited surprise on the way?  We’ll find out at the end of June (when the mystery ‘delivery’ is scheduled).  Of course, ITM will duly report any ghostly findings to our dear readers. 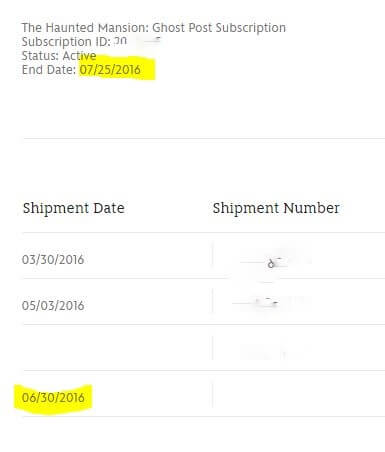 Could this be the “token of appreciation” that Madam Leota mentioned in her praise after the deck of cards was mastered*(thanks to Rob Stevens for pointing this out).

*Several Foolish Mortals are experiencing issues with the Spirit Board – the puzzle is solved and they are instructed to lift the device to reveal a message.  However, when the phone is lifted off the board, there is a glitch in the program causing the entire process to have to be repeated.  Unfortunately, none of the other interactive items respond (instead the user is directed to the spirit board) until this puzzle is completed.  The spirits at the Dead Letter Post (a bulletin board for questions and concerns) have addressed this issue and also replied with an email message:
Salutations!

Yes, a few others mortals have reported this happening to them too.

Be sure that you are using a table or surface devoid of metal. Wood, glass, and marble are the best type to work on. Also be sure that any metal objects (such as soda cans) are not near the items. There is also a calibration tool within the app to better tune the Spirit Board to more precisely match the bat’s spectral frequencies. To engage this mode, do the following:

1.    Press the ‘i’ button on the main screen of your Phantom Radio
2.    Enter ‘calibrate’ mode by tapping the word ‘calibrate’ along the top edge of the screen.
3.    Follow the onscreen instructions

While some guests may have been able to get through the first 2 boxes using an iPad or new iPhone SE model, the spirit board in Box 3 was built to specifically work with the official supported devices below as they were designed with the exact positioning of key sensors within these devices. For guests on devices not on the list below, the upcoming app update will add a hidden “cheat/advance” option that guests can use to at least advance past portions they cannot complete.

*Supported iPhone models: 4s, 5, 5s, 6, 6+  (note that the new iPhone SE is NOT supported as it was released after the launch of the product and may have different sensor positioning than the previous models)

Let us know if you have any further questions.
​
​Sincerest regards,