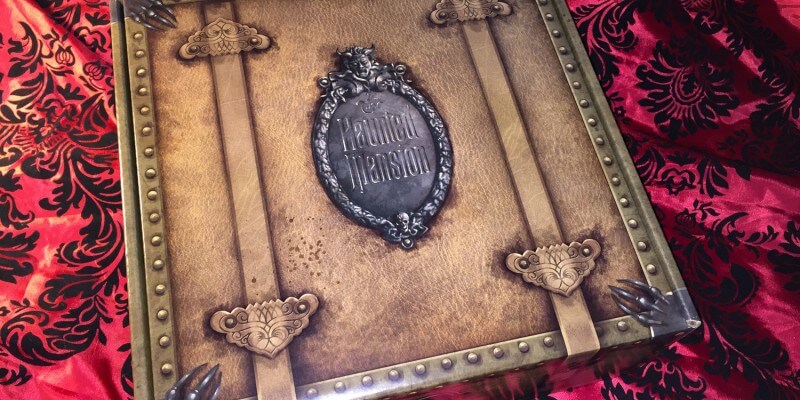 999 Lucky (or foolish?) Mortals have subscribed to receive special SCARE packages direct from the inhabitants of Disney’s Haunted Mansion.  These coveted mailings include clues and treasures to aid recipients in discovering what’s keeping the Hitchhiking Ghosts from being able to hitchhike.

The first of three medium sized boxes arrived this week.  Stocked with collectable items which interact with the special spectral device known as the Phantom Radio (an iPhone application that “tunes-in” to the objects revealing recorded story elements tied to the Mansion).  The tuner on the Phantom radio also seems to be able to receive sympathetic vibrations from the Mansion (as familiar music and narration from the home wall to wall creeps can be heard across the dial).

Check it all out in our first unboxing video – 30 minutes of Haunted Mansion fun: (image from the Dead Letter Office page by Disney)

Included in the first paranormal package is a welcome letter that’s more than it appears, one mysterious reflective tea cup, a variant of the familiar bat that adorns the velvet ropes of the Mansion (this one with his wings folded), a deck of cards depicting characters from the haunted attraction, the Grim Gazette (“a spirited and frightfully independent paper”), a marriage certificate (with special properties), housing for the Phantom Radio, an advert for Bloodmere & Broom’s Re-Dusting Service and an instruction/key card. The interactive elements of the Scare Package are both inventive and fun; a delight for any Haunted Mansion aficionado.  Some of the objects require alterations, but the thoughtful representatives at the Ghost Relations Department have managed to achieve this interaction in a manner that’s non-destructive to the collectable items. As misery loves company, the GRD has also provided clues and a forum for subscribers to share their experiences in the way of the Dead Letter Office.  This (cob)web page is full of hints and images from the coveted Scare packages.

With two more fiendishly fun dark delights yet arrive we’ll just die of anticipation for the our next shipment. . .