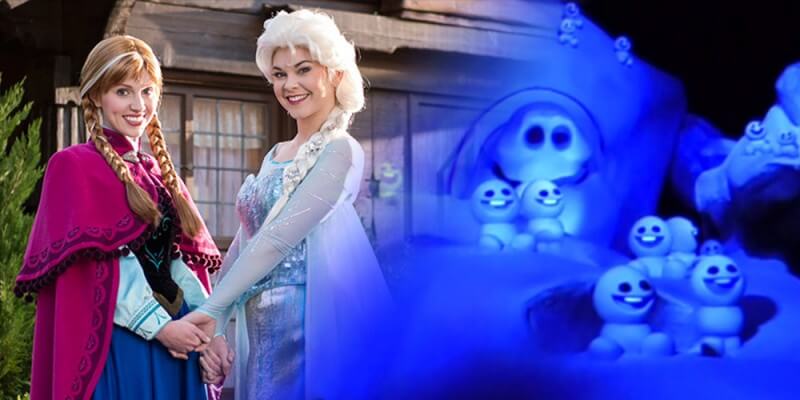 In a grand display of thousands (and thousands) of tourists packing into a small space, Epcot at Walt Disney World in Orlando Florida officially opened Frozen Ever After and the “Royal Sommerhus” meet-and-greet with Anna and Elsa.

Seriously…thousands. Look at this line:

Many fans have been a house divided on the necessity for this attraction to exist at all, mainly because Frozen-fever has basically taken over all of Epcot’s cherished Norway pavilion, including the beloved ride Maelstrom. The attraction originally featured the golden age of Vikings coupled with an encounter with some dastardly trolls, and then a log-flume dip into…an oil rig (classic). Snark aside, I personally adored the ride and made sure it was a part of my regular visits to the park growing up. But, while I was sad to see it go, I completely understand Disney’s reasons for replacing the ride. Frozen is a hot product for the corporation, and at the end of the day, they have a business to run. The ride will attract many more guests to the park, whether it seems like it fits in the overall vibe of the world showcase or not.

So let’s talk about that: how does the new Frozen expansion feel amidst the grandeur of Epcot’s iconic World Showcase? The truth is, it’s really not as bad as you would think — in fact, it’s not bad at all. The architecture of the Royal Sommerhus pavilion not only fits in with the Nordic architecture already in place, but adds and complements the scenery with thatched roof houses and a sort-of garden area fit for the Norwegian countryside. Nothing, save for signs outside of the individual attractions with the film’s logo, scream “LOOK YOU GUYS, FROZEN!!”

This was clearly done on purpose as an attempt to retain the integrity of the representation of Norway. Especially given the fact that Disney’s animated hit, while inspired by that country’s culture, does not actually take place in the country of Norway. So rest easy, purists. Frozen has not tarnished anything about the World Showcase. In a shocking twist, it’s actually enhanced it.

So how was the ride?

Frozen Ever After essentially follows the exact same ride track as Maelstrom, only the surrounding spectacle has been gutted and replaced with some of the most intricate and impressive animatronics on Disney property.

The story for the ride takes place after the events of the film, where you are invited to Elsa’s castle for a royal celebration. Characters throughout the ride sing some of your favorite songs, state some of your favorite phrases, and most importantly, come to life before your very eyes. Most of the faces on the characters are projection mapped, very much like the dwarves in Seven Dwarfs Mine Train at Magic Kingdom or Radiator Springs Racers at Disney’s California Adventure. They certainly get the job done. Granted, it was the first day and some of the animatronics were a little buggy or frozen (pun intended) in place, but Disney has never failed to come through with a fix within a few days — we won’t talk about Everest’s “disco yeti”.

One of the standout moments of the ride, and rightly so, is when you finally reach Elsa’s sparkling freezy fortress and experience the ice queen herself singing Let it Go. What starts as a casual passing by of a scene in a dark ride becomes a participatory immersive music video with screens on the walls shattering and sparkling to life, and Elsa herself sending your boat back through a glittering, frosted corridor with the power of her ice magic. It was fantastically executed and (dare I say it) thrilling.

Check out the sequence below:

The ride concludes with Anna, Elsa and Olaf gathering together to sing one last song before guests disembark and continue about their day. It doesn’t overstay its welcome, delivers the fanfare that one would expect from a Disney ride, and serves to complement the property both accurately and lovingly. Who could ask for much more?

The Royal Sommerhus addition to the Norway pavilion is pretty much your typical meet and greet experience. The only difference is, the queue passes through what is apparently Anna and Elsa’s summer home from when they were children. So guests will have the opportunity to see dolls the sisters used to play with as children, and other trinkets that may hint at what life was like for these two young ladies growing up.

A large part of me wishes there were a little more bells and whistles throughout the house to keep people occupied or entertained, but that’s a small complaint. I just think it would’ve been kind of neat to see Elsa have taken the home into her own hands and spruced it up with her ice magic somehow. Maybe a few of those little adorable snowman minions peeking out of corners, or hiding in the cookie jars. Then again, the dialing back of the magic a little bit may have been part of the imagineer’s attempt to not take away too much from the celebration of Norwegian culture in place.

When you finally meet the sisters, they are so excited to see you and beyond happy to talk about their memories in the home, how funny it’s been having Olaf around for the vacation, and other wonderful talking points. The kids will absolutely love the opportunity.

Overall, I personally feel like Frozen has a very comfortable home at Epcot. It doesn’t go completely fantasy bombastic (it’s not “Frozen Land”), and that absolutely works to its favor. There’s a delightful meet and greet opportunity, a stellar dark ride, and the rest is a celebration of Norway. The way it’s always been…just without Maelstrom.

I think, if I may offer my two cents, that fans should embrace change when it comes to the Walt Disney World parks. Do we have to be happy about the loss of a favorite ride? Of course not. A part of me still weeps for the loss of Mr. Toad’s Wild Ride at Magic Kingdom. But there’s always room for progress, and the parks will be constantly growing and changing throughout the entirety of their existence. So rather than swimming upstream and protesting something new, take a more positive route and find things to love about the new kid on campus.

A lot of very creative and talented people worked with love and dedication to bring this experience to life, and I guarantee they are so excited to share it with all of you. We now have two new quality experiences at Disney’s Epcot theme park — and what’s an “Experimental Prototype Community of Tomorrow” without a few experimental prototypes, and a community to honor the effort?