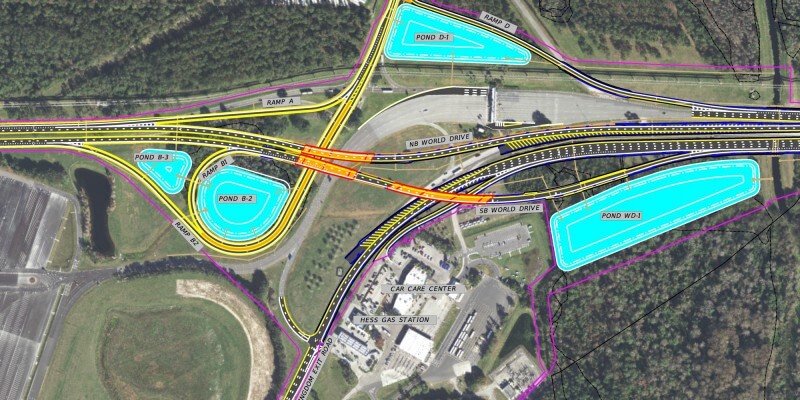 Walt Disney World is about to put their parking game in check. Disney has just filed plans to completely overhaul their parking structure for the Magic Kingdom, clearing the roadways for a possible new entrance to Hollywood Studios. Here’s what that looks like:

The road does not appear to connect to the theme park yet, so it could be meant for some other future Disney plan. However, it could also be an indicator that Disney is preparing Hollywood Studios for anticipated new traffic in the future due to the new Star Wars and Toy Story Lands, which do not have an official opening date as of yet.

Here’s another look for you: And here is the change as it affects Hollywood Studios: That makes any sense, let me break it down for you: from the looks of it, Disney wants to build a flyover of sorts to allow for bus and resort traffic to bypass the toll booths and simply continue onto northbound World Drive — this is the road that would take you to the Magic Kingdom resort areas. If you look closely, you’ll also see a southbound connection which would greatly relieve traffic congestion on Seven Seas Drive, especially around shift changes. Obviously, Disney wouldn’t put this plan into place if they didn’t feel it was in the best interests of their guests and employees.

Here’s another weird little diagram that shows what appears to be a new entrance to the Magic Kingdom parking lot itself. One of those roads actually leads to the back of the old Speedway, so it will be interesting to see how this all plays out. Personally, I would actually like to see more of the parking garage structures that have been built in the Disney Springs area. The technology that lets guests know how many parking spots are available, along with saving real estate by building up instead of out, makes all the difference in the world.

So what do you think of these new parking changes? Let me know in the comments below!