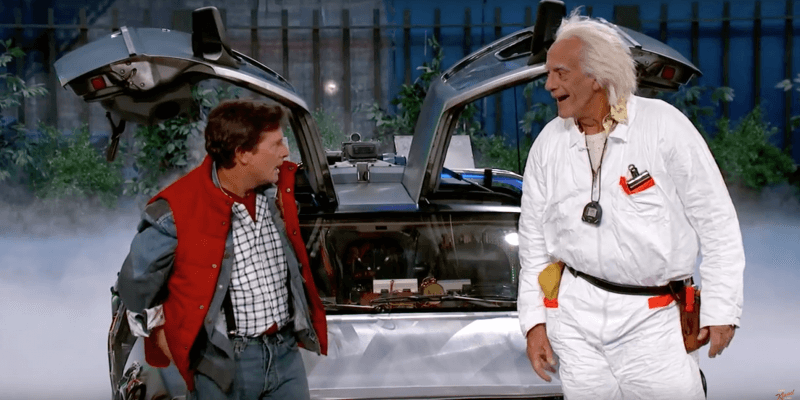 With October 21, 2015 bring the very same day that Marty McFly and Doc Brown visited “the future” in the Back to the Future trilogy, many fans celebrated the 30th anniversary by re-watching the films, buying up merchandise and visiting Universal Studios in both Orlando and Hollywood for special events. Many were also hoping that Marty and Doc would return.

Earlier in the day on the TODAY show, Michael J. Fox and Christopher Lloyd joined actress Lea Thompson to discuss the films and the impact it had.

But a full-fledged reunion finally arrived late Wednesday in this sketch with both characters “arriving” on the Jimmy Kimmel Live! show, which is being filmed in Brooklyn this week, with their trusty time-traveling DeLorean.

Let’s just say neither character seems to be too impressed with this version of 2015 beyond the fact that we don’t have flying cars or hoverboards, but we do have smartphones so there’s that.

And it even has a Huey Lewis cameo in his Back to the Future character! How cool is that?

Comments Off on VIDEO: Marty McFly and Doc Brown reunite on Jimmy Kimmel Live for Back to the Future Day