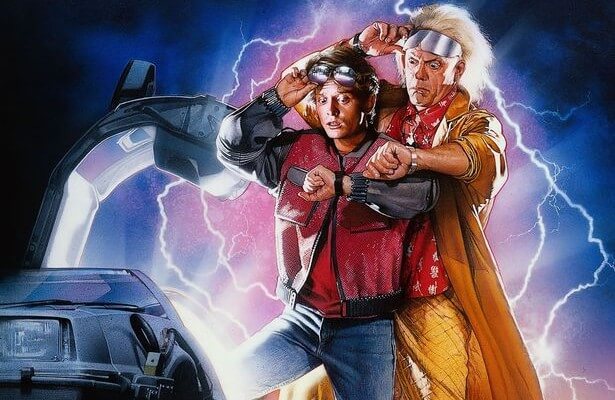 Opening in 1991, Back to the Future: The Ride, instantly became a fan favorite attraction at the Universal Studios: Orlando park. The ride followed Doc Brown and his attempts to stop Biff Tannen from changing the space time continuum. As you try to find Biff, you travel through Hill Valley in 2015, the Ice Age, and even the age of the dinosaurs. While the ride was replaced by the Simpsons in 2007, the DeLorean and Jules Verne Train are still present next to Springfield for guests to take pictures, and occasionally meet and greet Doc Brown or Marty McFly.

Even now, the films continue to influence pop culture around the world.

Today the internet has erupted with excitement over Back to the Future.

For those somehow not yet unaware, the franchise turned 30 years old this past July, and October 21st, 2015 is the day in “the future” that Doc Brown and Marty McFly travel to in Back to the Future Part II. While we may not have time traveling DeLoreans or flying cars, there are unique events and activities happening around the world to coincide with this special day. In fact, many companies have pitched in to celebrate the popular franchise. First, the films themselves are releasing in various formats today. Across America, Universal has put the films back into theaters for a one night event, .  Showings are starting around the US from 4 to 5 PM (EST), and continuing past midnight.

Even more exciting is the release of the 30th Anniversary Blu-Ray pack, and it is loaded with special features. The set technically released on October 20th, and comes with all three films digitally restored for Blu-Ray. They also come with a Flux Capacitor themed packaging box, two documentaries about the franchise (one about making the films, the other about restoring the original DeLorean), and the complete animated series on DVD.

Even Telltale Games, the makers of the popular Walking Dead and Game of Thrones games have released a 30th anniversary edition of their Back to the Future: The Game for PS4, XBOX One, and XBOX 360.

However, the Back to the Future fun does not stop there. A handful of companies have really joined in on the fun by creating products that were seen within Back to the Future Part II. One of the most popular examples is the release of Pepsi Perfect. Unfortunately, Pepsi took twitter to confirm it had sold out already and angering fans. Clearly the demand was higher than they thought. Also, Universal released their own special trailer for an upcoming movie, Jaws 19. The film appears in Back to the Future Part II as a jab to Steven Spielberg, executive producer of the franchise and longtime friend of Robert Zemeckis. While we never received official releases for the 14 Jaws films between, the trailer for Jaws 19 is well worth a watch.

With the rise in popularity of comic books, and their role as a medium to tell expanded stories (see Star Wars, Figment 1 &2, Big Thunder Mountain and even Archie vs. Predator), IDW is releasing a new series based upon the films. They should be available in comic shops in your area today, and look to cover alternative timelines and stories that were not present in the films. It’ll be interesting to see if they are as well written as the Star Wars series has been.

Another fun event is taking place at the town formerly known as Reston, Virginia. The town recently changed its name to Hill Valley for the next five days as they celebrate the Washington West International Film Festival. On Sunday, they’ll be screening the first film with Christopher Lloyd, Bob Gale (the writer), James Tolkan (Principle Strickland), and Claudia Wells (Jennifer in BTTF Part I) all in tow. Even better is that all the money generated by the screening will be donated to Michael J. Fox’s foundation for Parkinson’s research.

With so many events happening around the world today, it’s an exciting time to be a Back to the Future fan. Considering that Nike is still promising the release of a self-lacing shoe by the end of the year, we may still have more exciting events on the way. The celebration of these films, and the incredible response to them 30 years later is proof that they maintain their status as one the great American film franchises in history.

So charge your hover board, take a sip of a Tab or a Pepsi Free, and check back later here at Inside the Magic for special celebrations taking place today from Universal parks on both coasts!