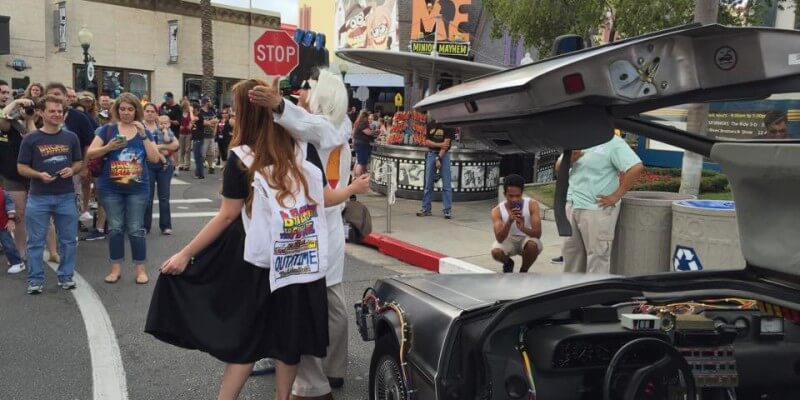 Today is October 21st, 2015; No need to jump your time circuits, this isn’t another internet hoax.

The official “Back To The Future Day” has arrived in the heaviest of ways at Universal Studios Orlando. It was hard to escape the energy once you walked into Universal Studios. Between the guests in cosplay, the live band playing all the classic songs including those memorable Huey Lewis & The News from the film franchise, and most obvious was seeing Doc Brown driving around in his DeLorean. You can normally find Doc on a daily basis tinkering around the park on different inventions but for today’s significance, he brought the his working time machine and returned to the “roads” of 2015 once again. Even though its not the future that was depicted in 1989, we’ve come close. The Chicago Cubs almost made it to the World Series, we now have hover boards and flat screen TV’s, Pepsi Perfect is a real thing (though in extremely limited supplies) and video calling is already old news.

Still, for all of us who awoke in this version of reality, the love we have for a franchise that started 30 years ago is as strong as ever.

Guests flooded the park today decked out in their best versions of 1989’s 2015 style; From Marty McFly, Jennifer Parker, and Doc Brown in his 3 most memorable outfits (Radiation Suit, Plastic Double tie and red suit from 2015 and his classic lab coat). One family even got their newest bundle of fun in by dressing up as the Trio with Mom as Jennifer, Dad as Doc and the little guy as Marty.

Several guests had brought in their pink Mattel hover boards while others were head to toe in Back To The Future hats and t-shirts. When the film opened, nobody knew that the fanbase would be this strong three decades later and turn into a timeless cult classic franchise. Even with no reaming “Back To The Future – The Ride” attractions left in either of the two stateside parks (Universal Studios Japan has the last operational attraction), there’s no shortness on the love associated with this film. One thing is for certain; after today, everything we know about the future will be in the past.

In the words of Doc Brown himself, “Your future is whatever you make it, so make it a good one.”