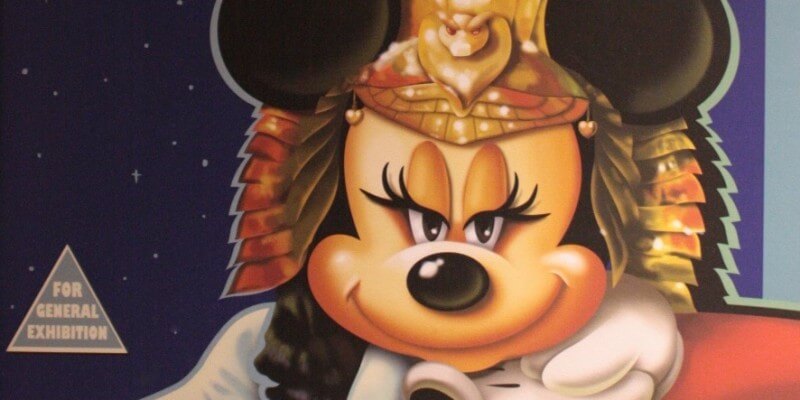 Sitting in one corner of the cavernous Magic of Disney Animation building at Disney’s Hollywood Studios is a location with historical references par excellence: the Minnie Mouse meet and greet, which is stuffed to the gills with inside jokes and tributes to Disney history.

The meeting room itself with Minnie lacks any special touches, but that’s because the visitor is focused on Minnie by that point. Out in the waiting room, where patrons sit for long minutes without moving, is where the jokes are needed, so that’s where are to be found. 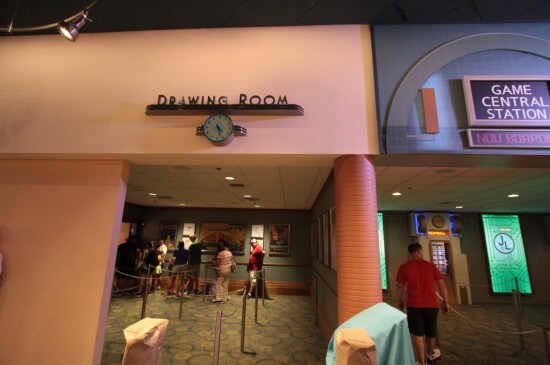 Scattered around the walls of the waiting area are posters done up in the style of famous Hollywood movies, but with Disney characters and often some sort of pun. That’s the first-level tribute, but there are almost always second-level tributes too that go deeper and refer to other things. The poster for Cleopatra (Minnie) and “Mouse Antony”, for example, includes mention of Ludwig von Drake and Horace Horsecollar, two Disney characters from early in company history. 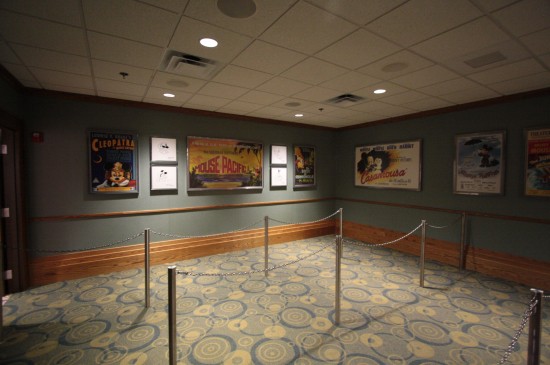 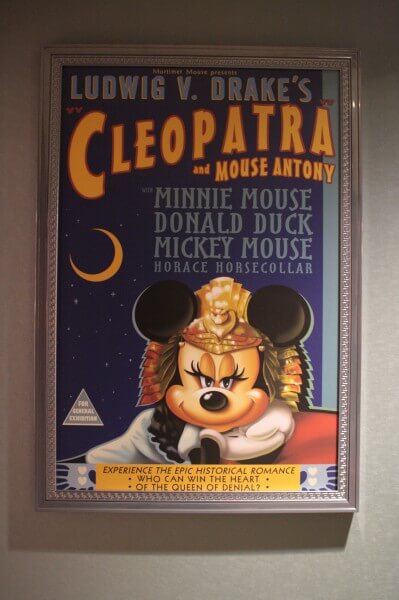 Another poster for “Ailurophobia” mentions Clarabell Cow, Ludwig von Drake, and Drake Mallard–bringing DuckTales into the list of references. 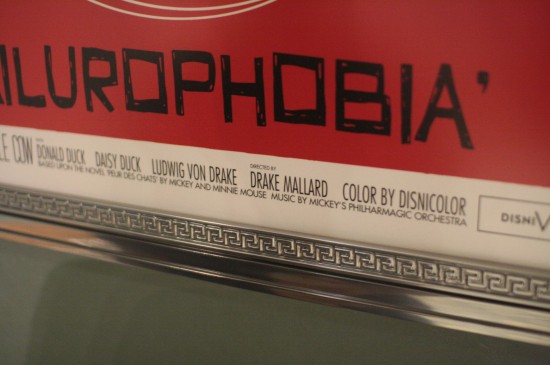 The “Casamousa” poster mentions Oswald Rabbit, in tribute to the original star of the Disney Brothers Studio, who has later stolen away from Walt and only returned to the company line-up in the past decade. 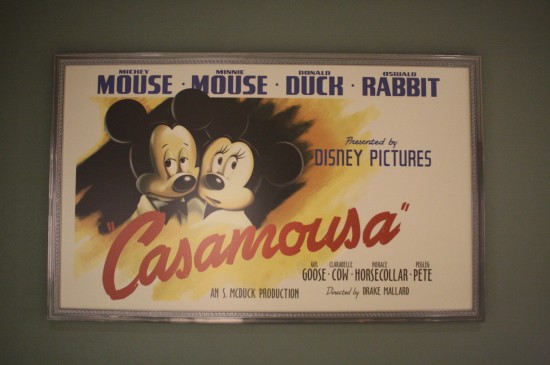 Oswald shows up a second time as one of the line-art drawings. Right near Oswald is an even more rare character: Mortimer Mouse, the early precursor to what would become Mickey Mouse (and the character that was born on Walt’s train ride home after losing Oswald). 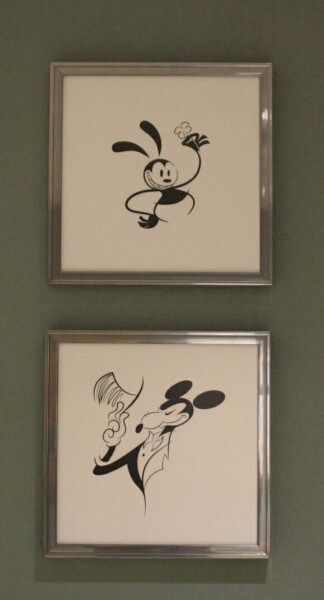 The volume of inside jokes really reaches a fever pitch, though, with the “Jungle Cruise” poster. Not only is the movie name itself a reference to the famous Magic Kingdom ride, but there are other inside references galore here. Across the top is an opening date: July 17, which turns out to be the same day Disneyland (in Anaheim) opened. The visuals of the poster are clearly referring to the Anaheim Jungle Cruise, as we see a depiction of the Anaheim Trader Sam (“two of his heads for one of yours”) and the piranhas leaping out of the water, which only occurs at the Anaheim Jungle Cruise. Meanwhile, the names given in the credits are further homages. Harper Goff and Bill Evans were Imagineers who helped build Disneyland’s Adventureland, and John Lasseter is the Imagineer/Animator behind many PIXAR successes. 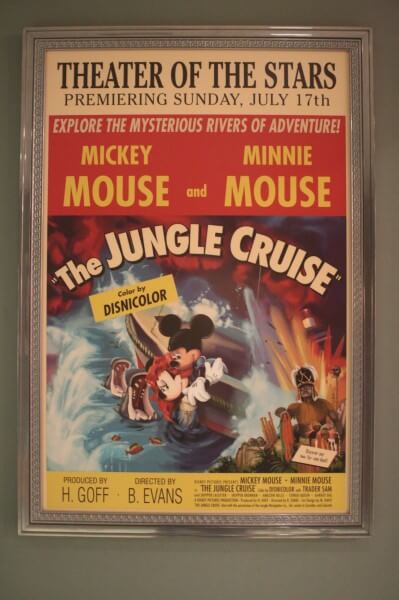 Equally weighty is the poster for “Mouse Pacific.” Right off the bat, we see the tribute to the Sherman Brothers, who wrote many of the iconic songs in Walt’s day for both movies and park attractions. In the background, we see the Orlando Tiki Room, and flitting overhead is the Orange Bird himself, a mascot from the Tiki Room eatery (Sunshine Tree Terrace) from the early days. In the credits for the movie, look for the names of the Tiki Room macaw performers intermingled with their character names: Michael Burley (Fulton Burley), Jose Boag (Wally Boag), Fritz Ravenscroft (Thurl Ravenscroft), Pierre Newton (Ernie Newton). 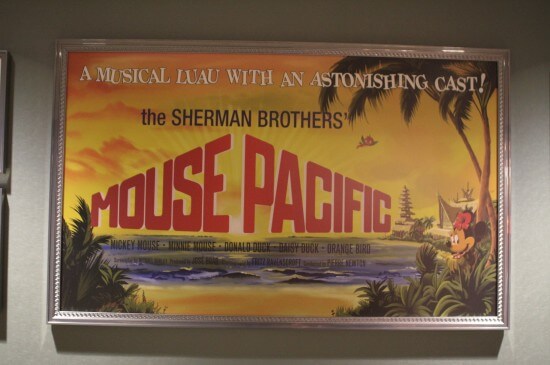 If you like D-Tales, you’ll love Kevin Yee’s book Walt Disney World Hidden History (second edition, 2014). This softcover book tracks Disney’s “hidden history” — remnants of former attractions and tributes to Imagineers as well as other Disney officials — hiding in plain sight in the parks. There are over 300 entries in the book! Whether tribute or remnant, each item discussed starts with something visible in today’s parks; the idea is that this is something you could visit and see with your own eyes, and then appreciate the historical thinking behind it. Since most visitors aren’t local, the book includes a photo of every item discussed so you’ll know what to look for. The softcover book has a digital counterpart with the Kindle version. (You can also read a Kindle book on PC or Mac even without a Kindle device – the software itself is free.)