A flash flood of yellow balloons and yellow streamers greeted the crowd as Gru from the movie “Despicable Me” pushed the red button marking the official opening of Despicable Me Minion Mayhem at Universal Studios Hollywood Friday, April 11, 2014.

Mario Lopez of television’s “Extra” served as the emcee of the short ceremony, which also featured a fast paced dance to the Oscar-nominated song “Happy” from the movie “Despicable Me 2.”

The attraction is similar to the Florida version, with the main show, a 3D moving seat simulator experience, identical to its counterpart. 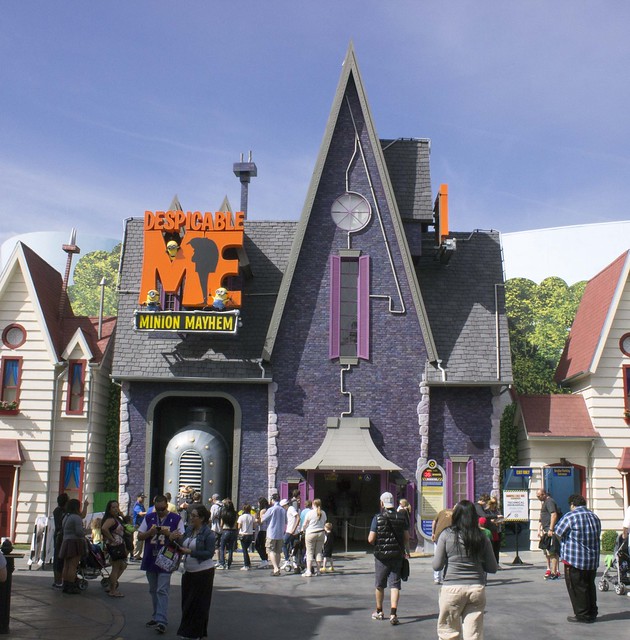 Unlike the Florida version, the attraction is set in a themed mini-land. The front of the building features mockups of the houses as found on the street on which Gru and his daughters live, complete to the “dead” grass on the front lawn of Gru’s house.

On the north side of the building, near the ride’s exit, sits a shop featuring everything from stuffed Minions, to stuffed unicorns and Grus and more. Outside is a themed area called “Super Silly Fun Land” from the movies, which replaced the park’s former Coca-Cola play area. It includes a wet and dry zone in the play area, with signs reading, “parents must be accompanied by children.”

The wet zone is pretty much guaranteed to get anyone entering wet – actually soaked – judging by the amount of water periodically dumped by two large buckets. Today, the zone was still blocked off, as it had not received final approval from the city.

There is also a ride called “Silly Swirl” that is similar to Dumbo and the Astro Orbiter at Disneyland.

“We wanted to do more development for this show than we did in Florida,” said Jon Corfino, the show producer and project director for the ride.

Themed mini-lands appear to be the new direction for Universal Studios Hollywood, as they also have a city of Springfield rising out of the hill around The Simpsons Ride, and the Wizarding World of Harry Potter will feature an elaborately themed land too.

Corfino added that he did not speak Minion while working on the project, but he understood them. The grand opening event brought celebrities down the yellow carpet, affirming their love of Minions.

Here’s a look back at the grand opening of Universal Orlando’s version of Despicable Me Minion Mayhem in July 2012: