As summer ends and children return to school, Halloween season rapidly descends on the world, nowhere more prominent than in Orlando, home to the country’s preeminent haunted theme park event: Halloween Horror Nights. This year, Universal Orlando promises to involve the event’s biggest fans more than ever with an online and in-park interactive adventure under the banner of “Legendary Truth” – beginning immediately.

While Disney prepares to wrap up its alternate reality game The Optimist at the 2013 D23 Expo this week, Universal is just getting started on theirs, promising more opportunities to dive deep into the fiction of Halloween Horror Nights 2013 with a rich storyline of historical figures interwoven with that of haunted attractions.

Legendary Truth has been a part of Halloween Horror Nights for several years, offering fans a chance to become more involved with the lead-up to the actual event by playing games, solving puzzles, and interacting with the “masters” from Universal’s Art and Design department. Last year it evolved into Horror Unearthed, an in-park experience sending fans hunting through Universal Studios Florida on select nights, scanning cards, finding characters, earning points and achievements along the way.

This year, Universal’s creative team are combining both concepts, providing an opportunity for fans to immerse themselves in the world of Halloween Horror Nights long before it even begins. It all begins by registering at HHN23Experience.com. Everyone starts with a clean slate this year, with no points inherited from last year’s competition between “Legions of Horror.” 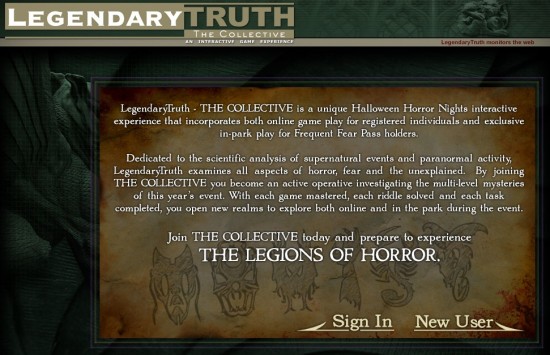 Once registered, players can expect to receive e-mails, text messages, and perhaps even phone calls pertaining to the story. 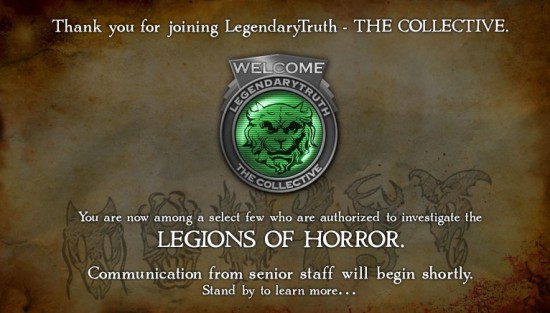 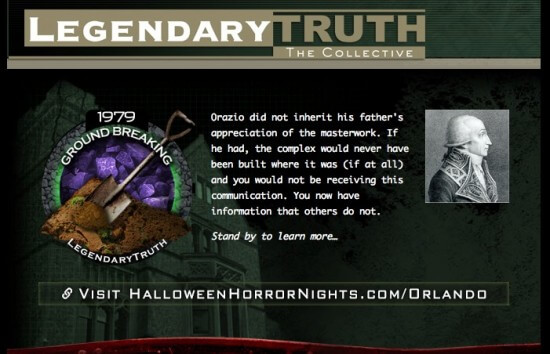 Next to an icon for the 1979 Legendary Truth groundbreaking, the e-mail reads:

“Orazio did not inherit his father’s appreciation of the masterwork. If he had, the complex would never have been built where it was (if at all) and you would not be receiving this communication. You now have information that others do not. Stand by to learn more…”

Players immediately opted to not “stand by” but rather sprang to action researching what little information was contained herein, many working together online in the unofficial Horror Unearthed Facebook page.

It was quickly determined that “Orazio” was the real-life son of Francesco Melzi, a Renaissance-era man who inherited the famed works of Leonardo da Vinci. But it seems Orazio did not share the same interest, instead somehow leading to the creation of Legendary Truth, a group founded to research unusual (and quite often paranormal) happenings.

Legendary Truth has been directly tied in with several Horror Nights haunted houses over recent years, including getting their own house – the Wyandot Estate – two years ago. With only three mazes announced this year, there’s a strong possibility this mysterious organization will be featured once again.

At a recent horror convention, Universal’s Art and Design team introduced a few of their plans for Legendary Truth, but stopped short of revealing any specific details:

Where the story goes from here is anyone’s guess, unfolding over the next few weeks, leading up to the debut of Halloween Horror Nights 2013. Once the event begins, players who purchase a Frequent Fear Pass will be drawn into an in-park experience building on last year’s Horror Unearthed, providing rewarding reasons for frequenting the darkened streets of Universal Studios Florida.