'Horror Unearthed' game became hidden gem of Halloween Horror Nights 2012, with fans on hunt through Universal Studios - Inside the Magic

Amidst the weeks of laughs and screams produced by the many experiences offered at Halloween Horror Nights 2012, Universal Orlando also offered additional entertainment quietly tucked away to enhance the event for its biggest fans. Horror Unearthed was the name of the free game that unexpectedly began online on opening night and throughout its run presented opportunities to play mini-games, complete tasks, solve riddles, and earn points, all culminating in a wild park-wide scavenger hunt ending with a surprise grand finale event.

Truly the most unique element of this year’s Halloween Horror Nights, Horror Unearthed mainly attracted hardcore fans, eager to be engaged beyond simply walking through haunted houses and scary streets. In past years, Universal Orlando often presented visitors to the official Horror Nights web site with a variety of games or other interactive features that elaborated on the stories behind the event’s experiences prior to its debut evening. This year, due to restructuring, new leadership, and shifts in focus and budget, in the weeks that led up to the opening of the event, that site remained relatively plain, much to the dismay of its loyal fans. But Universal Orlando’s talented art and design team had secret plans to include those excited fans in what proved to be one of the most intense Horror Nights experiences to date, enabling those who participated to join together for fun opportunities. 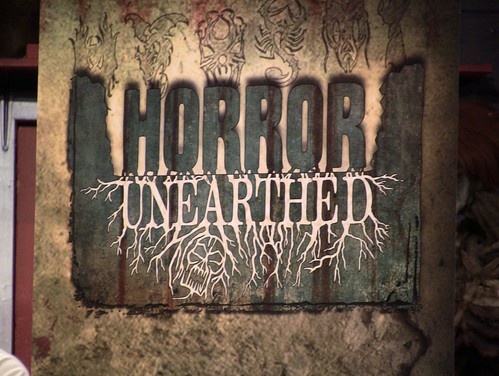 It all wrapped up this past Sunday, Oct. 28, 2012, when much was revealed about the madness behind this mysterious and rather “underground” effort during the last night of in-park tasks. In the early hours of that evening’s event, a final task was posted online, simply reading, “Which Switch is Which? Find the Master, who can scan, Who roam the park, from man to man,” providing a 1-hour window for completion. What ensued was a confusingly fun chase around the park. With Horror Unearthed game cards in hand, players followed cloaked figures through dimly lit streets to determine which had the correct scanner to award them points and a special virtual badge. But immediately after that insanity ended, a second message sent attendees to a wrap-up party that no one expected.

Before summarizing what was said at the special ending event about why Horror Unearthed was created and what can be expected for Halloween Horror Nights 2013, it’s important to take a step back and recap how it all began last month.

Tying into this year’s new park-wide street experience, visitors of Halloween Horror Nights 2012 could register with Horror Unearthed online via the event’s web site and join one of the Legions of Horror and earn points for their group by playing one of six online games. Those who frequented the event could earn further points by picking up Horror Unearthed cards in the park and and scanning them at the exit of each haunted house, sometimes visiting the mazes in a specific order to earn additional points and virtual badges.

Staffing the card distribution area in the park were those who created the game – members of Universal’s art and design team – many of whom are integral to the creation of each year’s Halloween Horror Nights experiences. Familiar faces and names included TJ Mannarino, Rick Spencer, and Ray Keim. It afforded fans an opportunity to regularly chat with some of the creative minds behind it all. 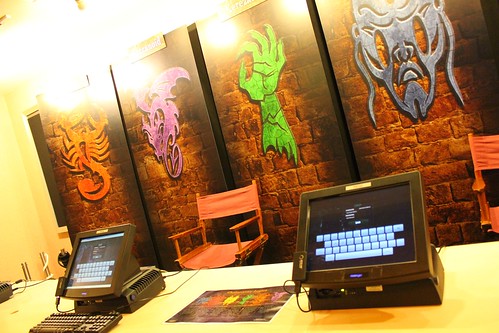 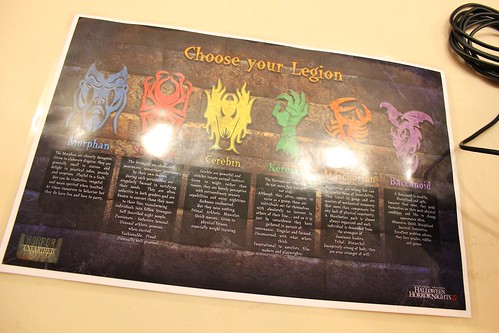 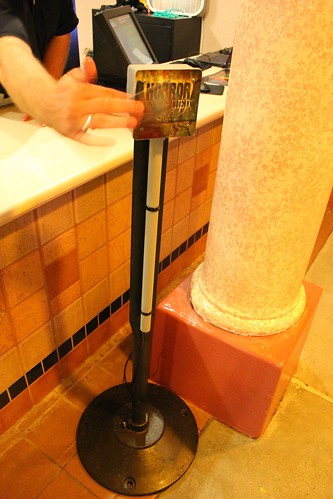 On select nights, additional tasks were posted to the Horror Unearthed site requiring players to solve a puzzle and arrive at a specific location at a specific time to further boost their legion’s standing. No reward was promised at the end of it all, but competition quickly ensued between each legion and among players wanting to top the leader board.

Horror Unearthed was never designed to reach the masses of Halloween Horror Nights, instead appealing only to those who were looking to get more out of the event, whether from home or while visiting Universal Studios Florida. But while gameplay turned out to be relatively simple, there were (and are) plans for much more.

Horror Unearthed was created solely with Halloween Horror Nights fans in mind. The goal was to not only offer additional experiences for those who frequent the event but also to open dialogue with some of the event’s designers, who are also fans themselves. Social media was utilized to its fullest throughout the experience, via e-mail, text messages, and posts on an unofficially-created (but officially blessed) Facebook page devoted to the game.

It was through those methods that the final task evolved beyond the riddle posted to the Halloween Horror Nights site. Universal Orlando creative manager Rick Spencer sent out e-mails to select fans with the expectation they would share them with everyone else. And they did, inviting players of all legions to gather together at the park’s Pantages Theater for a grand finale.

Throughout the weeks of Halloween Horror Nights, tasks specific to each legion presented opportunities for players to seek out characters and physical objects that represented their groups. These special objects appeared just once in the park specifically for these gatherings, but united and on display for the first time together within the theater: 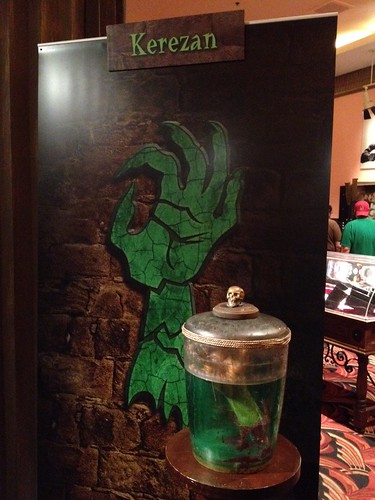 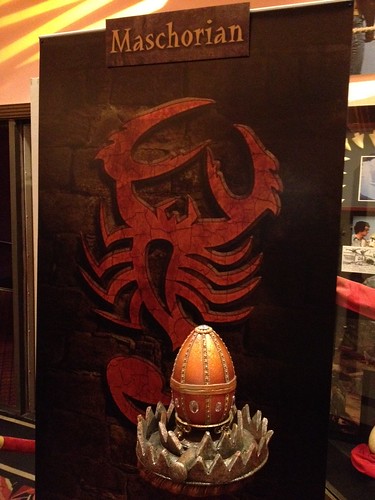 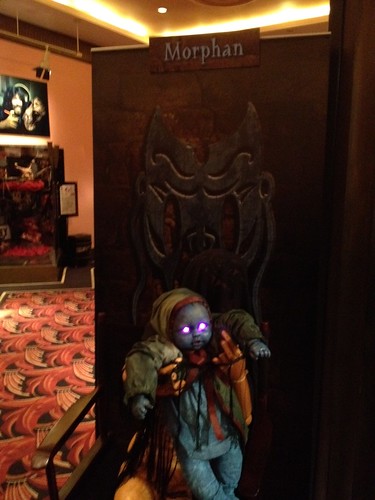 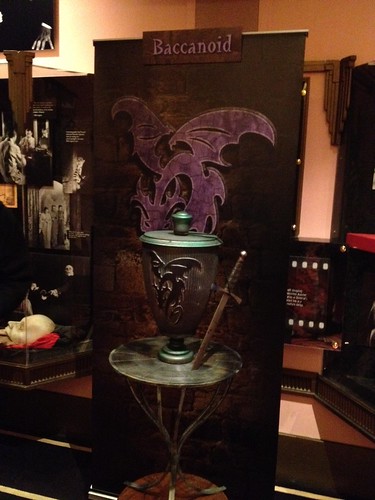 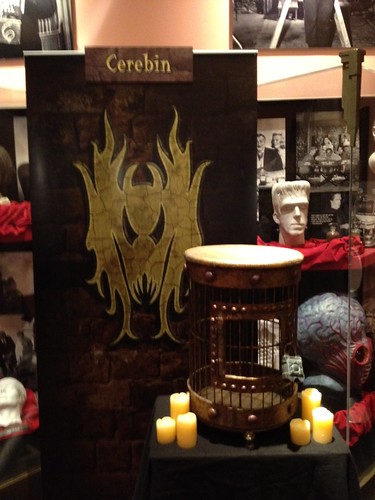 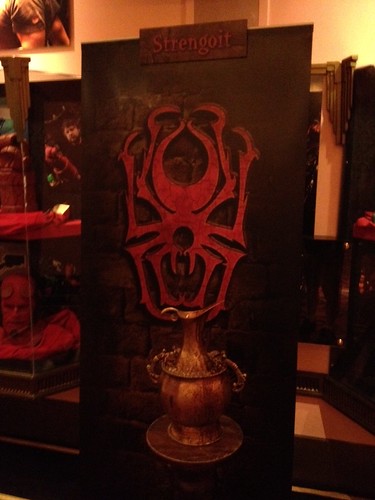 Players had also previously (half-jokingly) discussed online that they deserve cookies as a reward for completing the tasks – and Universal complied, offering complementary (and delicious) macadamia nut cookies and water after a frantic run through the park.

Then everyone was ushered into the theater where Universal’s art and design team revealed themselves as the cloaked figures that were previously being chased, with scanners in hand. From there, after a brief introduction as seen in the video above, attendees were asked to end all recordings to keep the presentation special for only those who were there. But much insight was shared as to how well received the game was and what plans Universal has for its future, particularly at Halloween Horror Nights 23 next year. 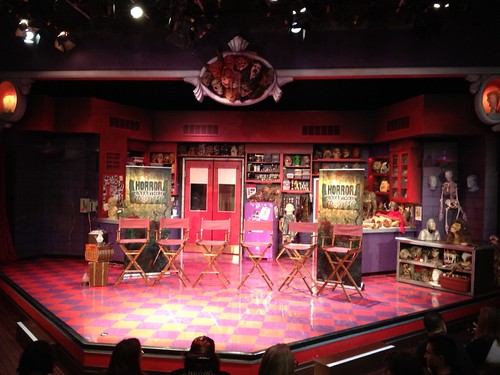 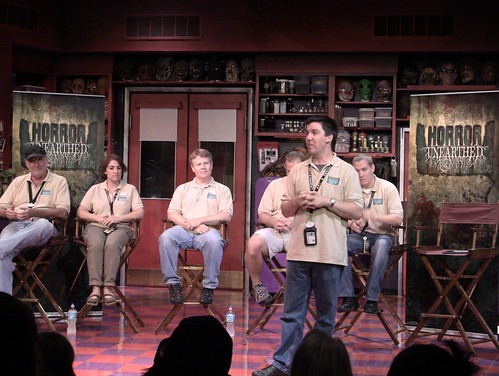 Director of art & design TJ Mannarino fielded most of the questions and supplied the majority of the information. It was his team that created all the graphics for the games and the site, while a separate outside company programmed it all, having worked on prior years’ events. 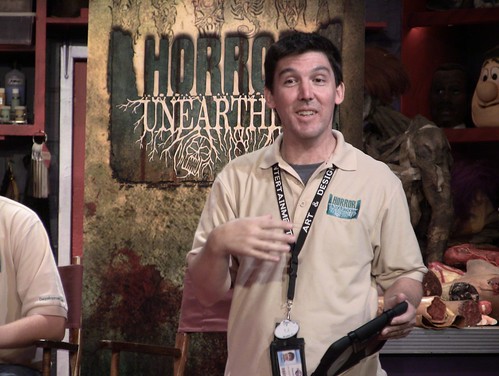 While tens of thousands of people attended Halloween Horror Nights throughout the season, it was a tight-knit group of close to 900 people who ended up playing Horror Unearthed in the park. A far greater number the played games online, reaching nearly 7,000 people total. As of Sunday night, more than 375,000 games had been played online with over 28,000 virtual badges earned. The team seemed quite pleased with these numbers, considering their game had no support from Universal’s marketing or PR teams. In fact, despite the game being pitched internally back in January, it didn’t receive funding and approval until May, a mere four months before Halloween Horror Nights began, leaving the team short on time to piece it all together, simultaneously working on their regular daily responsibilities, including getting Horror Nights up and running.

Horror Unearthed isn’t the first time Universal’s art and design team has created experiences tailored for Horror Nights fans. Prior efforts include the widely enjoyed Legendary Truth series of online mysteries that even wound up inspiring haunted house in 2010. But this new game moved in a different direction, encouraging fans to work together, both in the park and at home. It sparked communication and created new friendships, drawing the Horror Nights fan community closer together, confirmed by resounding applause in the finale event’s audience.

Moreover, Horror Unearthed gave fans additional reasons to return to Halloween Horror Nights more times than they likely would have otherwise. One player named April was mentioned as the leader in house scans at 147 over the course of the event through Sunday night. She also managed to visit the Silent Hill maze an impressive 26 times alone. This information provided by the Horror Unearthed card scans certainly confirms that the event has a huge fan following.

Because the whole initiative was new from the ground up for the Universal Orlando art and design team, they opted to keep the scale of Horror Unearthed relatively small for 2012. They produced just 3,000 RFID-equipped cards that would track the in-park players. It was necessary to keep the game relatively secret, as their infrastructure and small group of behind-the-scenes technicians were simply not equipped to handle every person in the park participating. It was a learning experience for them, quickly getting acquainted with equipment procured from all over the world, often resulting in frustrating missed scans or sometimes inaccurate tallies.

Other technological problems arose with poor cell phone service throughout the park, preventing many players from checking the necessary web site, text messages, e-mails, and/or Facebook posts to discover and complete tasks. (Availability of free Wi-Fi in the park is a future hope of many, including the design team.) As a result of these and other tech issues, the planned scope of Horror Unearthed was scaled back a bit during its run. Many tasks and interesting card uses were considered but never sent out in an effort to keep it all simple.

Future possibilities include a task that rewards players with merchandise discounts or a first crack at exclusive, limited edition merchandise. Players may find themselves working together, scanning cards simultaneously or arriving to a location in a large group and getting scanned using “high proximity” sensors. Likewise Universal may offer more advanced game play, allowing players to at times “freeze” a scanner, locking it into a specific team for 10 minutes. Of course, opposing teams could have a “fire card” that would free up that scanner when played. Other card features may include a multiplier card for bonus points or, Rick Spencer’s favorite, a Jekyll and Hyde card that will randomly either add bonus points – or take them away. And scanners may not be located only at the exit of haunted houses, but hidden within street props or on roaming characters, much like during the finale task. However the team was adamant that the game will not ever interfere with the “Halloween experience” and will not require hunting for scanners within the mazes, as that would disrupt the rest of the guests.

But the future is bright for Horror Unearthed – or whatever it may be called next year. Though the art and design team is not sure how much funding they will receive for the game in 2013, they are confident that it will return in some form, enhanced by the knowledge they’ve learned from this first year’s test phase. The Dark Legions and characters seen in this year’s game may not return in exactly the same form next time around, but they likely will somehow tie in, not only to the 2012 event but also potentially to Halloween Horror Nights icons of the past.

Most importantly, to ensure exciting and unique experiences like Horror Unearthed continue to have a place at Halloween Horror Nights, the art and design team recommends fans submit written notes to Guest Services at the theme park. While exit and online surveys help Universal understand the good and the bad of this year’s event, it is these messages left in person that hold the most clout and tell the higher-ups exactly what fans want to see – and are willing to spend their money to participate in.

Halloween Horror Nights 22 has one night remaining for 2012: Halloween night itself. The Horror Unearthed house scanners will still be in place and active throughout that last night, though card distribution and in-park tasks ended this past weekend. The games will remain on the Horror Nights web site for the time being, with fans continuing to build their friendships online, eagerly anticipating the surprises already being planned for 2013.