The new Sorcerers of the Magic Kingdom interactive game at Walt Disney World has been testing for a few weeks, but today Disney has revealed a timeframe for when it will make its debut.

Sorcerers of the Magic Kingdom has been set for its official debut in late February. By the end of next month, Disney will have readied the role-playing game that lets guests join forces with Merlin to defeat Disney villains by casting spells via trading cards, all included with park admission.

More than 20 Disney villains will be included in the game, a number greater than has been spotted so far during testing. Sorcerers of the Magic Kingdom is playable within four of the theme park lands: Adventureland, Fantasyland, Frontierland, and Main Street, U.S.A. Each guest is given five cards to play the game, but can accumulate a collection during repeat visits to the park. 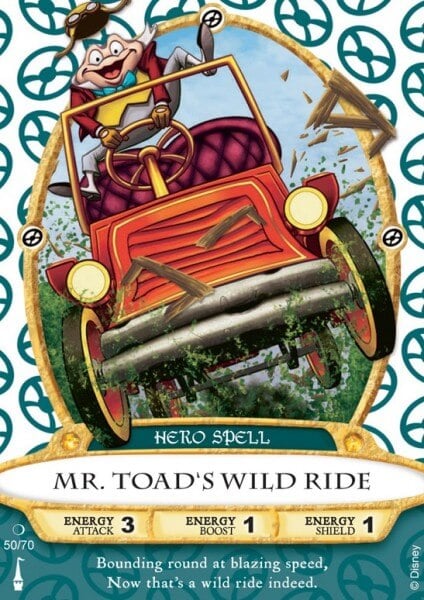 Contrary to what some have believed, there are only 70 total spell cards available, each offering players a different spell to cast to battle villains during the game. It’s the symbols on the cards that have caused some confusion, some of which Disney has cleared up today. Each of the full 70 cards is one of nine spell classes, including Princess, Hero and Warrior. Spell cards are also separated into three categories, rare star cards, uncommon moon cards, and common planet cards.

Each spell card also features a variety of attributes, including Attack, Boost, Shield. More than one card can be used simultaneously for unique effects. Personally, I look forward to getting my hands on the Mr. Toad’s Wild Ride card pictured above.

Sorcerers of the Magic Kingdom is still testing at Walt Disney World, so all features may not be enabled until it makes its official debut in late February. In the meantime, don’t miss my report from its first day of testing, including video walkthroughs of a few of its many quests, one of which is also included below: