In a new press release, Disney has offered additional details for how the stage will be set as guests board Star Tours: The Adventures Continue, the prequel to the popular Star Wars-themed ride opening next month.

According to the release, the first queue area room will remain largely the same as it has been since the original Star Tours attraction opened:

Entering the attraction queue area, Star Tours guests walk into a bustling spaceport. The famed Star Wars droid duo, C-3PO and R2-D2, greet them as the Starspeeder 1000 is prepped for service. Anthony Daniels, the voice of C-3PO and the only actor to appear in every theatrical chapter of the Star Wars Saga, reprises his role as the golden protocol droid. Daniels worked with Walt Disney Imagineering to record new dialogue for the attraction. 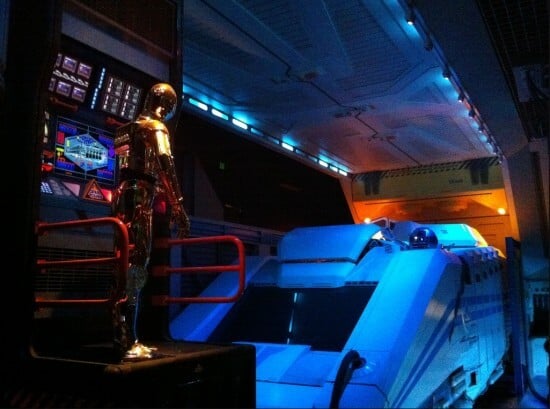 (Photo from the original Star Tours on its last night)

But in addition to the two familiar droids, guests will catch their first sight of new Star Tours characters:

Guests also are introduced to AC-38, a hotshot droid pilot known simply as “Ace,” and Aly San San (voiced by actress Allison Janney), the “spokesbot” for the spaceport. 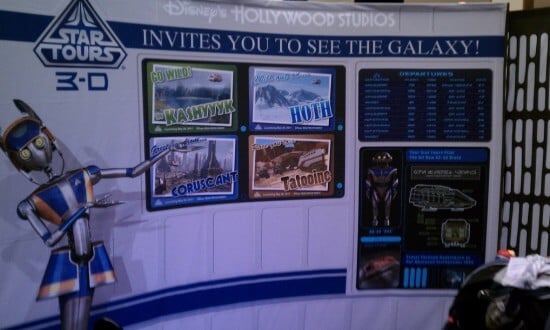 It’s been known for a while that C-3PO would be the new pilot of the Star Tours attraction, but exactly how he ends up in the cockpit has remained a mystery. It’s presumably part of the elaborate pre-show that Anthony Daniels recently referred to in an interview. But in today’s release, a few more details have been unveiled:

After winding through the spaceport, guests board the Starspeeder 1000 spacecraft and prepare for Star Tours Flight #1401. Through a series of mishaps, however, C-3PO finds himself in the pilot’s seat instead of Ace, and it’s up to him and R2-D2 to navigate their passengers through the galaxy. However, the tyrannical Empire is out to stop the Starspeeder at all costs. C-3PO and R2-D2 take the controls and try to outwit and outrun the Imperial forces and a galactic bounty hunter hired to pursue the spaceship and its passengers.

(The number 1401 is a reference to the street address of Walt Disney Imagineering in Glendale, Calif. – 1401 Flower St.)

Whether it’s a battle with Darth Vader and his legion of stormtroopers or a plea from Princess Leia to help her save the Rebellion, guests will find themselves in the middle of the action – literally – in the 3-D, multi-sensory attraction.
[…]
And along the way guests may encounter Star Wars characters that offer to help (or hinder) their journey, including Yoda, Admiral Ackbar, Darth Vader and Boba Fett. “Skytroopers,” a legion of stormtroopers created just for the Star Tours attraction story, might even join in the chase.

Guests and Star Wars fans will find out all the details when Star Tours: The Adventures Continue opens at Disney’s Hollywood Studios in Walt Disney World on May 20, 2011, followed by at Disneyland in California on June 3.