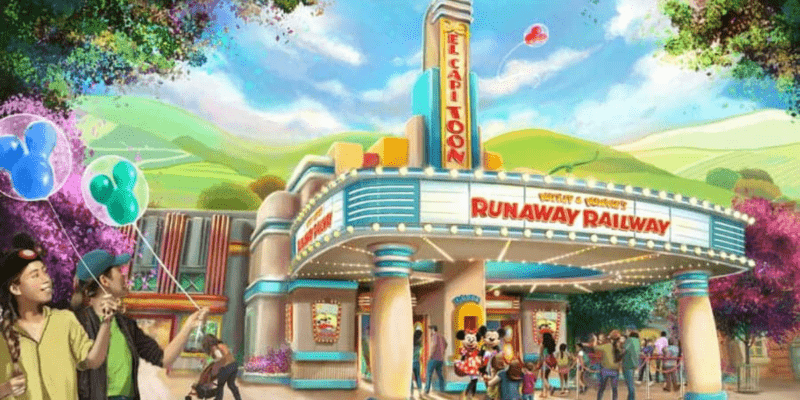 We’ve got some not-so-surprising news for one of Disneyland’s newest attractions.

When Mickey & Minnie’s Runaway Railway opens in Disneyland on January 27, it will utilize a virtual queue just like previous attractions like Star Wars: Rise of the Resistance and Guardians of the Galaxy: Cosmic Rewind.

The queue times for Mickey & Minnie’s Runaway Railway will be held two times each day, with one being held at 7 a.m. and 1 p.m. PT. This was just shared by reporter Scott  on Twitter (@ScottGustin):

NEW: Mickey & Minnie's Runaway Railway at Disneyland will use a virtual queue when it opens on Jan. 27. Guests will need to join via the Disneyland app. There will be no traditional standby on opening day. The ride will also be available as an Individual Lightning Lane purchase. pic.twitter.com/7hqFdDzDzw

The ride first opened at Walt Disney World in Disney’s Hollywood Studios and has proven popular ever since. Mickey & Minnie’s Runaway Railway incorporated tons of complex and high-tech features like projection mapping and a trackless ride system not seen in many other Disney rides.

The ride system is similar to what can be found in Remy’s Ratatouille Adventure in EPCOT and Star Wars: Rise of the Resistance in Disney’s Hollywood Studios. Mickey & Minnie’s Runaway Railway has proved to be a popular attraction at Walt Disney World.

The new ride will be located in Mickey’s Toontown at the Disneyland Park when the land opens back up on March 8, 2023. While Mickey’s Toontown is closed for now, there is still plenty for Guests to experience at the Disneyland Park, including iconic attractions like The Haunted Mansion, “it’s a small world,” Jungle Cruise, Pirates of the Caribbean, Splash Mountain, Space Mountain, Matterhorn Bobsleds, Peter Pan’s Flight, and much more.

Of course, Guests can head over to Star Wars: Galaxy’s Edge to live out their own Star Wars adventures with incredible rides and attractions as well as “out of this world” shopping and dining experiences.

Are you excited? What’s your favorite Disney attraction?