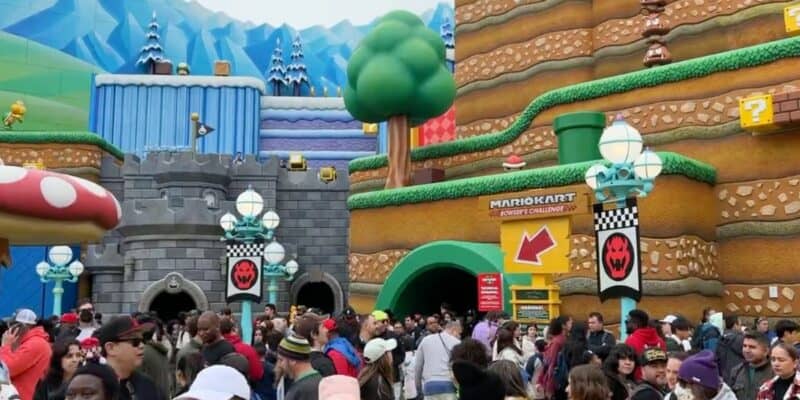 Someone found a Fire Flower.

After waiting quite some time, Guests have finally been able to experience Super Nintendo World at Universal Studios Hollywood. The exciting land first opened in Japan a few years back and has been a slam dunk for both fans fo Mario as well as theme park enthusiasts.

The new land opened a few days ago at Universal Studios Hollywood and Guests have been super impressed with the amount of detail, interactivity, and overall cuteness of the new land.

Unfortunately, Guests were forced to evacuate the new land after a fire alarm was activated. A video was shared on Twitter of the incident which you can check out down below:

A fire alarm was triggered and everyone has been evacuated from both Mario Kart and Toadstool Cafe.

A fire alarm was triggered and everyone has been evacuated from both Mario Kart and Toadstool Cafe. pic.twitter.com/YkdkjG5poZ

This is a funny coincidence, as Walt Disney World was recently evacuated as well due to a fire alarm going off on one of Disney’s most popular attractions.

From the moment guests pass through the iconic green pipe, a journey filled with exploration, discovery, and play awaits that is entirely unlike anything they’ve experienced before. Their journey begins as they enter Peach’s Castle before venturing further into the colorful Mushroom Kingdom.

SUPER NINTENDO WORLD will sweep guests into the 360-degree world of Mario, Luigi, and Princess Peach, where they will become an integral part of their exhilarating universe. Plus, with the purchase of a Power-Up Band™ – wearable, interactive wristbands – guests will be able to deepen their interactions across the land.

Super Nintendo World will not just be limited to the West Coast, as Universal’s Epic Universe will also contain Nintendo-themed rides and experiences when it opens in 2025.

Will you be visiting this new Nintendo-themed land at Universal Studios?