Fight at Universal Studios Ride Caught on Camera - Inside the Magic 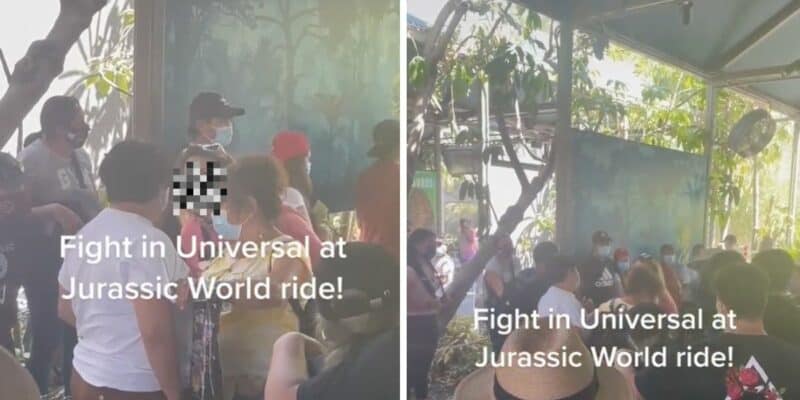 A fight at a major theme park was caught on camera.

When visiting any theme Park in the entire world, you will surely be waiting in line at some point or another; it’s just part of life as a theme park goer.

While Universal Studios continues to create new and exciting rides and attractions, new rides also mean that the lines will get longer and longer. Hagrid’s Magical Creature Motorbike Adventure in The Wizarding World of Harry Potter consistently reaches multiple-hour waits every day, with no end in sight. While waiting in line is usually just boring, it can turn uncomfortable when someone gets too close or even worse, starts an argument.

A fight was caught on camera involving Guests at Universal Studios Hollywood. The video was shared on social media platforms like TikTok, where it first caught our attention. You can check out the video below:

As you can see in the above video, an argument unfolds while Guests are in line at Jurassic World – The Ride. It’s unclear what the argument between the Guests was about.

Of course, these actions go against Universal Studios’ rules and regulations for its Guests. If you choose to disrespect or endanger those around you, be aware that the consequences may be grave.

It’s important to note that Universal Team Members work to ensure that everyone is safe during their trips to Universal Orlando Resort and that there are rules in place that must be followed, and if they are not, it can result in expulsion from the theme park, bans, or even getting the police involved depending on the severity of the situation.

Have you ever been involved in a situation like the one shown above?