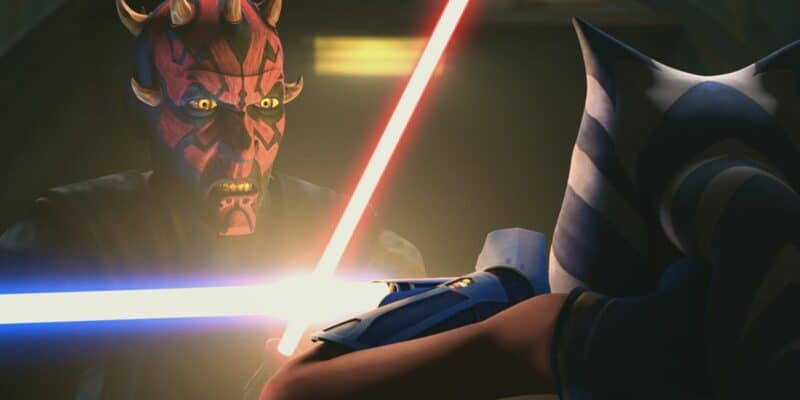 When Disney announced that The Clone Wars was returning for one final season, fans lost their mind.

George Lucas sold the rights to Star Wars to Disney in 2012, and one of the first things to be canceled was Star Wars: The Clone Wars. Fans were outraged by this decision since the series wasn’t given a proper sendoff. In 2019, Lucasfilm announced that the series would finally get its final season and tell the story of how Sam Witwer’s Maul and Ashley Eckstein’s Ahsoka fought on Mandalore.

Beforehand, Filoni had revealed snippets of the story here and there, but no one knew all the details about their duel. In Season 7, Lucasfilm dedicated four episodes to explore the Siege of Mandalore as it fits in with Order 66 and the Fall of the Republic.

After Clone Wars ended, fans got to continue the story with Clone Force 99, one of the newer additions to the Star Wars galaxy, who now has their own series on Disney+. During the first duel between Ahsoka and Maul, one fan realized that if you look closely, Maul actually has Beskar legs and deflects a lightsaber with one of his legs:

Dude I just freaking noticed, he’s using his metal legs to deflect Ahsoka’s lightsaber strikes. I only know of one type of metal that could do that, he has BESKAR LEGS!! I don’t ever want to hear anyone say he isn’t a Mandalorian.

Dude I just freaking noticed, he's using his metal legs to deflect Ahsoka's lightsaber strikes. I only know of one type of metal that could do that, he has BESKAR LEGS!! I don't ever want to hear anyone say he isn't a Mandalorian. https://t.co/SqyDN6z67b

While it may be a stretch to call him a Mandalorian, Maul could’ve used his legs to help him win more fights as his opponents wouldn’t be used to a force user using this technique. If Maul did incorporate more of this into his fight, there’s a chance he could’ve defeated Ahsoka and been able to take Ahsoka with him.

This would’ve set Maul and Ahsoka onto a path toward trying to kill Palpatine, which may have worked, but in the end, fans won’t ever know. Maul could still use this ability in future projects, but it seems odd to give the villain Beskar legs and not give him Mandalorian armor under his robes. This would’ve been super cool and solidified Maul’s control over Mandalore.

Do you think Maul should’ve had more Beskar? Let us know what you think!