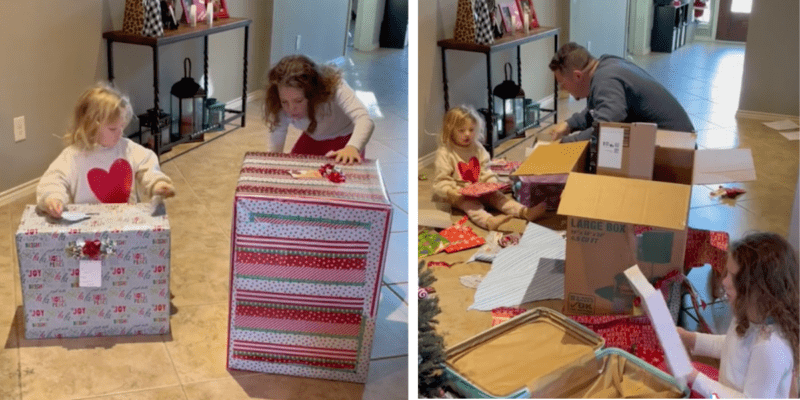 Such a magical gift is a once-in-a-lifetime experience for many children, and it often shows as they scream with delight in adorable viral videos. Even some grown-ups tear up at the opportunity to visit a Disney Park!

Angela Hare (@mrsangelahare) and her husband expected a similar reaction when they filmed their two daughters on Christmas morning. Hare shared the video to TikTok, where it went viral because of her toddler’s unexpected reaction:

When your Christmas surprise doesn’t go as planned

The five-minute video boasts over seven million views and 45 thousand comments. As the girls opened suitcases, the younger of the two was upset because her luggage wasn’t princess-themed, and she expected toys on Christmas morning.

Inside the suitcases were multiple Disney shirts and a box containing a sheet of paper that revealed their five-day Walt Disney World Resort vacation. The older daughter calmly opened each shirt and squealed with delight when it all clicked that she was going to see Cinderella Castle!

Still, the little one was confused. Too young to read and truly understand that she was receiving something better than a toy, she remained upset about the gift when the camera was turned off.

Hare has stayed out of the comments section, where Disney fans debated about the youngest daughter’s reaction. “This is a great ad for birth control,” @high4fayth wrote.

“The little one needs to be taught was Christmas is really about,” @bekki80 agreed. Many said they would have left the younger daughter at home and only taken the older girl on vacation.

But others pointed out that the little one is barely out of the toddler stage and too young to understand what the gift meant. She couldn’t even read the note inside the box.

“Children act certain ways for a reason,” @afjfeisty argued. “It’s much better to try to understand her emotions than to punish her for expressing them.”

The viral moment also inspired other videos. @robertdowneyweeniehutjr shared their thoughts in a TikTok that received almost 200,000 likes:

The comments on the video are so mean too!!!!! #thatsideoftiktok #disney #christmas #suitcase #presents #disneyworld

“I feel like it’s time to retire putting such high expectations on kids’ reactions to elaborate gifts and then posting it on social media when it’s clear their reaction will be embarrassing to them when they are old enough to understand,” the TikToker wrote. “You coulda just given her a Mickey Mouse toy and been like ‘Guess where we are going!!’ Elaborate songs and dances are for the parents not for the kids.”

“People in that comment section saying such hateful things about a literal toddler… it boils my blood I feel so bad for that little girl,” @laurellins agreed.

What do you think of this viral Walt Disney World surprise?