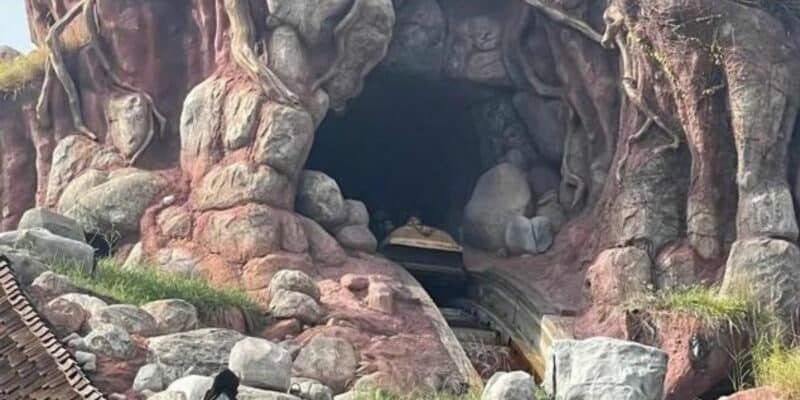 Guests can expect a fantastic experience when visiting all of the Disney Parks across the world. While these Parks are all great, none truly compare to the special magic that the original Disneyland offers Guests in Anaheim, California. With classic and original attractions like Haunted Mansion, Mr. Toad’s Wild Ride, “it’s a small world” and the Matterhorn Bobsleds, it’s no wonder this Resort is a big hit with local and international Guests.

One thing that isn’t so great though is when a ride gets stuck. While this is a common occurrence at the Disney Parks and Resorts, with some passionate Disney fans even hoping it happens to them, getting stuck for most is an annoying or even scary experience, especially when at the top of a 50-foot-drop in a Disney Park.

This is exactly what happened to a few Guests recently at Disneyland while riding one of the most beloved and infamous attractions in the entire Resort.

A photo was shared online of the incident, which you can check out down below:

Splash Mountain broke down! Here’s a pic of people stuck at the top of the drop

Splash Mountain broke down! Here’s a pic of people stuck at the top of the drop from Disneyland

As you cam see, some very unlucky (or lucky, depending on how you feel about Disney evacuations) got stuck right before the huge drop on Splash Mountain. We are;t sure if this stop resulted in a complete evacuation or if the ride was able to start up again.

Splash Mountain is an incredibly popular ride that has been loved for decades, but the attraction will actually be undergoing a complete transformation very soon. We just recently found out the closing date of the attraction in Walt Disney World.

It was announced first back in 2020 that Splash Mountain would be taking characters and stories from Disney’s The Princess and the Frog (2009) and completely reimagining Splash Mountain. The decision comes after many years of controversy regarding The Song of the South (1946), the film on which Splash Mountain is based upon.

Will you miss Splash Mountain? Are you excited about the upcoming retheme?