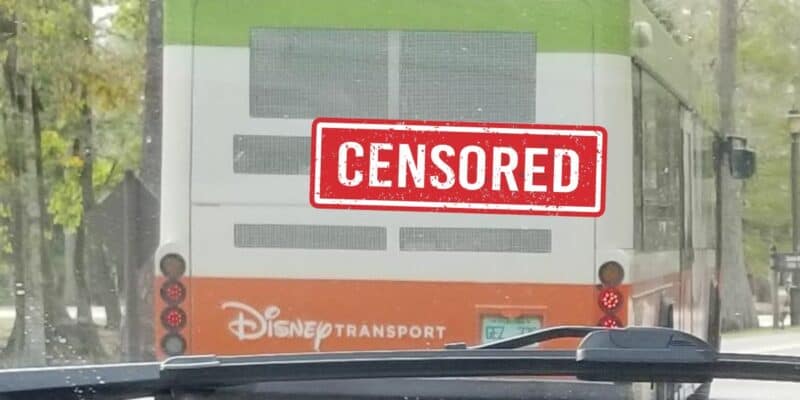 The backside of a bus caused some commotion at “The Most Magical Place on Earth.”

One of the biggest benefits of staying at a Walt Disney World Resort hotel is the free transportation. Guests have the choice of taking all kinds of various transportation methods, including the Monorail, boats and water taxis, or Disney’s recently-added Skyliner.

Guests can board Disney’s Skyliner and glide past incredible views of the Disney Resort’s waterways, woodlands, and two Walt Disney World theme parks. The Skyliner connects to both Disney’s Hollywood Studios and EPCOT, meaning both of these Parks are just a short ride away. However, there may not be a more popular and time-tested option than the bus service.

Buses help Guests get from all Disney World hotels and Parks, as well as both water parks and Disney’s massive Disney Springs shopping center. The only issue with the bus service is that you could end up waiting quite some time for one, depending on where and when you’re going.

However, the last issue you expect to see with a Disney World bus is some explicit language.

A hilarious photo was shared online recently involving a Walt Disney World bus. You can check out the post below:

Man, the buses be wildin

Man, the buses be wildin from WaltDisneyWorld

As you can see, the back of this specific Disney World bus reads, “Please, Ass.” This is presumably a longer message but has been cut at just the wrong (or right) spot for it to read as such. A common phrase to see on the back of the bus is “Please Do Not Pass,” so it’s very likely that this is what it should be reading as.

Hopefully, the bus didn’t drive around the Walt Disney World property too long with this message on it!

Have you ever spotted a funny incident like this at Disney World or Disneyland?