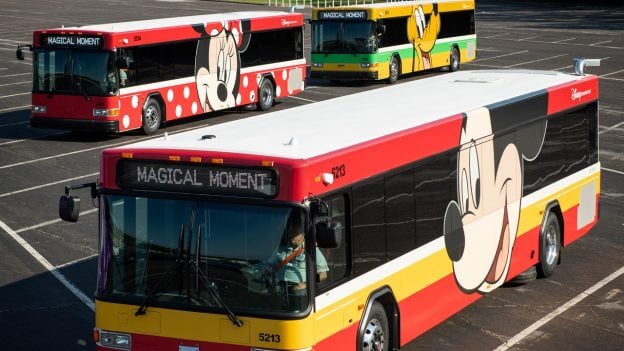 Walt Disney World Resort is not just home to many iconic attractions, but also convenient and immersive ways to allow Guests to stay immersed in the magic during their entire vacation.

If you stay at a Disney World Resort, you have access to convenient transportation that will take you to all the Disney Parks and Disney Springs. This means you never have to get back in your car or even leave Walt Disney World Resort during your trip if you so choose to.

As Disney continues to develop its fleet of transportation, many Disney Park Guests are beginning to notice a new amenity taking over the buses: USB chargers for mobile devices.

In a recent Reddit thread, many Guests said adding this amenity is “unfortunately needed” because of the additions to the Disney Parks, in particular Disney Genie, Genie+, and Lightning Lane.

“With Genie+ and MDE requiring GPS nowadays, every little bit helps,” User U/LightBoxRadMD said. “We were scrambling to buy back-up cell phone battery packs during our trip last month. Tip: All the parks have Fuel Cell battery backup dispensing machines which were vital during our last trip.”

However, some Guests said they wonder how much the USB chargers can truly be utilized.

“This is cool but the busses are so packed, I just envision standing on the bus and now in addition to kids running around and jumping into me, I’ll have moms slamming their heads into me as they try to plug in,” User U/macemillianwinduarte said.

Disney Genie was introduced at Walt Disney World Resort in the fall of last year. The service is complimentary and helps Guests plan their day. Disney Genie+ and Lightning Lane were also introduced last year and these are paid services that give Guests the opportunity to attempt to reserve a spot for some of their favorite attractions, skipping the regular standby queue.

Disney just recently updated its website to lower the expectations of the Disney Genie+ and Lightning Lane, and the controversial services have been major discussions among Disney fans since their inception.

Here is what Disney World says about its Resort bus transportation:

In addition to buses, Disney also offers water and monorail transportation at select Resorts. To find out what kind of transportation each Resort offers, please visit the official Disney website.

Disney Guests who fly to Orlando just saw an important method of transportation end in the Magical Express that was managed by Mears Connect, which used to take Guests to Disney Resorts from the airport to their hotel. Now, there are several paid options, including buses, taxis, and ridesharing apps.

Do you use the USB charging ports on Disney Resort buses? Let us know in the comments!