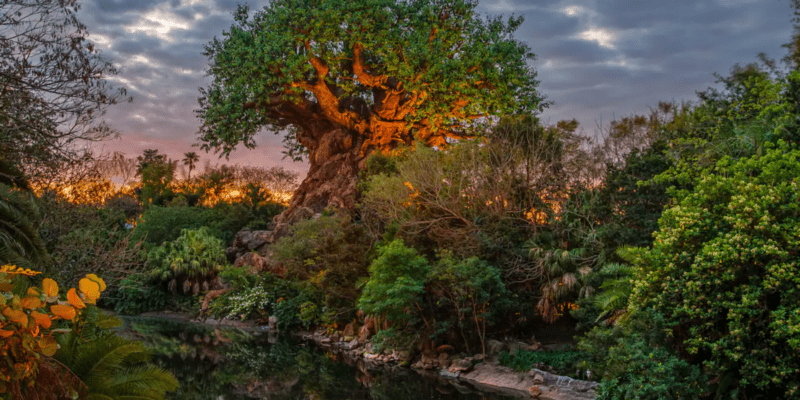 While some may have already realized this, we have to say that this unique detail has completely blown our minds.

However, for motor thrilling adventures, Guests should head on over to Disney’s Animal Kingdom, where they can interact and immerse themselves with animals of today, yesterday, and fantasy.

Of course, the biggest (literally) attraction in Disney’s Animal Kingdom has to be Expedition Everest. It’s fast, thrilling, and one of Disney’s most impressive projects. But for Guests looking for even more of a thrill, they need to head on over to DINOLand U.S.A.

Here, Guests will find a lot of various things to do, but nestled near the back of the land sits an attraction that will scare the Mickey hats right off your heads.

DINOSAUR opened alongside the Animal Kingdom Park in April of 1998, although it had a different name and offered a slightly different experience. DINOSAUR is an extremely dark ride that showcases dinosaurs of all different sizes and species. When DINOSAUR opened, it was actually called “Countdown to Extinction,” but this name was changed just a few years later in 2000 to help promote the animated Disney film Dinosaur (2000).

Although the track layout, ride vehicle, and story are all almost entirely the same, the ride was a bit different before becoming the DINOSAUR we know and love (or love to hate!).

The ride has gone through some changes over the years, most notably in 1026, which added new lighting and projection effects, as well as saw the dino animatronics get some much-needed love and attention. While the ride may be loathed by many, here at Inside the Magic, we have a few writers who absolutely love the experience that DINOSAUR offers.

Outside of DINOSAUR, Walt Disney World really doesn’t have an attraction that could truly be considered scary. The last truly frightening experience, ExtraTERRORestrial Alien Encounter, closed at the Magic Kingdom in 2003. DINOSAUR has been thrilling and scaring Guests since 1998, though one aspect of the ride has been debate don recently, forcing a former Disney Imagineer to clear the air.

A few days ago, Remnants of Forgotten Disney, a Twitter account that stores, shares, and elaborates on “forgotten” Disney Park elements, shared a video online, comparing the dialogue change during one of the slower scenes on the ride.

For those who don’t know, Guests come toward a large Sauropod and top right in front of it, with it making a noise. This was originally accompanied by a “whoops” from Dr. Seeker, your scientific guide on this dangerous journey. However, this line was cut in 2018.

Check out the explanation and comparison of scenes in the video down below:

As you pass by the Sauropod on DINOSAUR, you’ll notice that your time rover goes over a small bump. Originally, this was accompanied by a “Whoops!” from Seeker- making it clear that you’re running over the poor dino’s tail. This line was removed in mid 2018, but the bump remains!

As you pass by the Sauropod on DINOSAUR, you’ll notice that your time rover goes over a small bump. Originally, this was accompanied by a “Whoops!” from Seeker- making it clear that you’re running over the poor dino’s tail. This line was removed in mid 2018, but the bump remains! pic.twitter.com/yj3DadMqgM

This post prompted a debate about the actual reason for the “whoops,” as many pointed out the dinosaur actually burped in the script, indicating this line from Dr. Seeker was directed toward the dino. Theories went back and forth during the day about the truth of the scene and dialogue until legendary former Imagineer Joe Rohde settled it all on Twitter:

So there you have it, from the man himself. The sound and cut dialogue were, in fact, written into the script for a burp. We’re sure there are tons more secrets lost to time at all of the Disney Parks and Resorts, let alone Walt Disney World in Orlando, Florida.

What’s your favorite ride at Disney? What’s the scariest attraction, in your opinion?