Daniel Radcliffe is known the world over for playing a very famous wizard in the Harry Potter franchise. However, a lot of people don’t realize that he also makes for a very spectacular “Pudding Man.”

Miracle Workers is an anthology comedy that was created by Simon Rich. Each season features the same all-star cast playing new roles in a new setting – from angels in Heaven to peasants in the Dark Ages and settlers in the Old West. 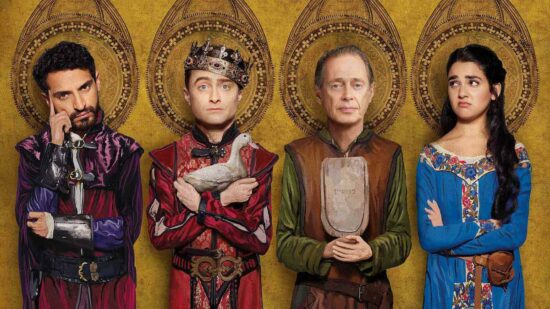 TBS has released the official trailer for Miracle Workers: End Times, the upcoming fourth season of the anthology comedy starring Daniel Radcliffe. The series is scheduled to make its return on January 16, 2023.

The Miracle Workers Season 4 trailer continues to tease the next installment’s Mad Max theme, as Daniel Radcliffe and the gang face life living in the post-apocalyptic suburbs. The video introduces Radcliffe as a wasteland warrior who falls in love with a ruthless warlord.

Related: A New ‘Harry Potter’ Theme Park Is Being Built

You might even get to see an odd little man in a top hat.

TBS has been teasing previous seasons on their TikTok account, including a fan favorite from Miracle Workers: Dark Ages where Daniel Radcliffe is enjoying a particularly yummy treat.

Tbsnetwork captions their video: Therapy is for Kings.

Therapy is for Kings 👑

“Next season follows a wasteland warrior and ruthless warlord as they face the most dystopian nightmare of all: settling down in the suburbs,” reads the synopsis.

“Together they navigate the existential horrors of married life and small-town living, all under the dubious guidance of a wealthy junk trader. Also starring Jon Bass as the couple’s faithful war dog, and Karan Soni as a kill-bot who loves to party.”

Are you caught up on Miracle Workers? Which season is your favorite? Let us know in the comments.