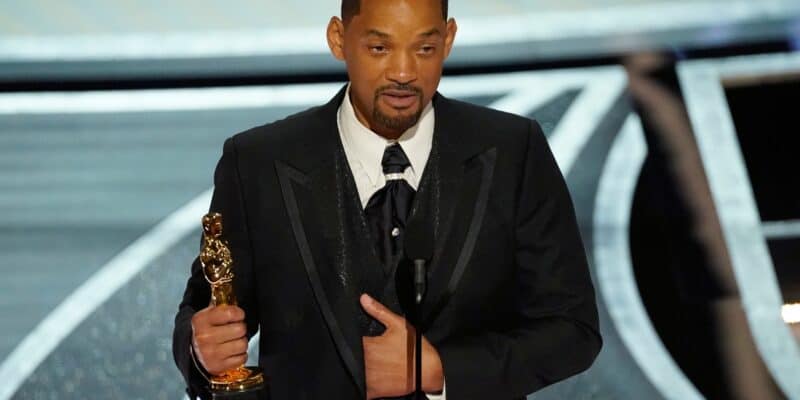 Will Smith has made quite the switch in terms of Hollywood over the last several months.

Smith, who has always been known for a squeaky-clean image, playing the roles of many beloved characters over the course of his career had a night that he’d rather forget this past spring during The Oscars presentation.

When Chris Rock made a joke about Will Smith’s wife Jada Pinkett Smith, he approached Rock on stage and delivered a slap that was the talk of Hollywood for several weeks. Smith later apologized and received a ban from The Academy for his conduct.

In the midst of the Oscars slap controversy, Smith saw several projects put on hold or delayed. There have been several rumors that Smith will be replaced by Disney in the upcoming Aladdin 2 project, with many reports indicating that Dwayne Johnson will now reprise the role of Genie but nothing has been confirmed.

Now, as Will Smith’s movie career begins to come in motion again with the release of Emancipation in December, Smith recently revealed that he had to miss a screening of the film due to an unfortunate COVID diagnosis.

“I was getting ready to surprise an audience who just watched Emancipation.”

“It then cut to an hour later, with Will on a video call telling the audience: “I tested positive. I made them do it again and again, so I’m definitely positive.”

The King Richard star joked in the caption of his post: “Throwback to when I went viral.”

Luckily, Smith was okay and is doing well now and is back on the promotion trail for the film.

When discussing his upcoming movie, Smith said he understands if some “aren’t ready” to see him return and that his deepest concern is his team.

“I completely understand—if someone is not ready, I would absolutely respect that and allow them their space to not be ready,” Smith explained. “My deepest concern is my team–Antoine has done what I think is the greatest work of his entire career. The people on this team have done some of the best work of their entire careers, and my deepest hope is that my actions don’t penalize my team. At this point, that’s what I’m working for.”

He continued, “I’m hoping that the material—the power of the film, the timeliness of the story—I’m hoping that the good that can be done would open people’s hearts at a minimum to see and recognize and support the incredible artists in and around this film.”

The director, Antoine Fuqua, said Smith was “the nicest person” he has ever met. It was recently revealed that Smith personally paid the extras who were playing dead bodies.

“He was kind to everyone on the set. Will would go around and hug and shake hands – we had 300-something extras and military. Marines.”He’s funny. He’s fun. We had certain extras that were the dead bodies in the graves, and he would go give them money for laying there in that heat over 100 degrees.”

The director continued, “I have nothing but amazing things to say about Will Smith, really genuinely. You can ask anybody that worked on the movie, they’ll tell you the same. Nicest person I’ve ever met in my life.”

Will Smith got his acting start on the popular sitcom Fresh Prince of Bel-Air in the 1990s. From there, he has gone on to star in many blockbusters, including the Bad Boys franchise, Men In Black franchise, Independence Day (1996), iRobot (2004), The Pursuit of Happyness (2006), and many others in a career that has spanned more than 30 years.

Will you be watching this new movie starring Will Smith?