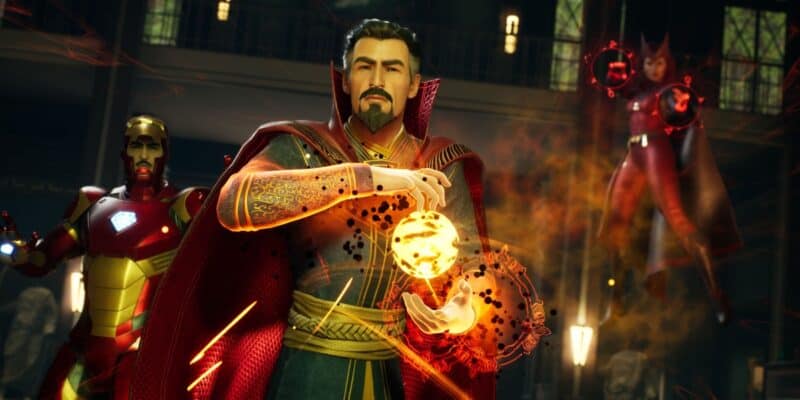 Marvel and 2K’s upcoming strategy RPG features a whole host of playable characters featuring members of the Avengers, X-Men, and more, but who exactly are the Midnight Suns? Far more than just the average gang of demon slayers, Earth’s first line of defense against the infernal forces of Lilith comes packed with a little star power as well.

Video games surrounding Earth’s mightiest heroes aren’t exactly anything new, but an RPG inspired by Marvel’s Midnight Sons comic run is certainly something fresh. While the line-up does feature some familiar favorites like Doctor Strange and Iron Man, there are a few oddballs and outliers thrown in for good measure. So before players even get their hands on a copy of the game, it might be a good idea to learn a little more about the heroes who make up the supernatural defense squad. Along with the in-game original, The Hunter, players will have the ability to build a team of heroes to combat the minions of Lilith, Mother of Demons. These are the heroes that makeup Marvel’s Midnight Suns.

“Spider-Man, Spider-man, friendly neighborhood Spider-Man.” There are few Marvel aficionados who haven’t had at least some exposure to New York’s resident wall-crawler. Spider-Man has enchanted and entertained millions of comic book readers since the ’60s, and he’s not beyond taking on a supernatural threat with the rest of the Midnight Suns. Armed with a suit infused with magic, Spidey will be webbing up minions and monsters with some spider-themed spells to make short work of Lilith’s army of darkness.

Undoubtedly, fans of WandaVision and multi-verse of madness will instantly want Wanda Maximoff on their team. Comic book logic dictates that the best way to fight magic is with magic, so it’s always handy to have at least one spellcaster in the party. However, Wanda’s penchant for the dark arts might lead to more harm than good in the game’s storyline. Even so, it will be interesting to see her dark magic against the demonic entities seen in the trailer.
Captain America

Captain Steve Rogers has tangled with Nazis, agents of HYDRA, Ultron’s robots, and many more. Demons and monsters should be a walk in the park for a hero with his tenure. If there’s one marvel character fans can rely on being a regular player, it’s Captain America. Lilith might have infernal legions and dark magic on her side, but let’s see how her minions fair against a shot from a vibranium shield.

Carol Danvers might be armed with cosmic energy, but even she might be a little surprised to tango with the forces of the supernatural. Sure, Captain Marvel is accustomed to fighting alien threats, but demons are another matter. However, that doesn’t mean she’ll go down without a fight. If anything, it’ll make for some very interesting combat visuals when the action really gets heated.
Iron Man

Genius, billionaire, playboy, philanthropist, Tony Stark has it all. Undoubtedly a favorite amongst many Marvel fans, no Avengers outing would be complete without an appearance from the mighty Iron Man. Like Captain America, he’s fought a bevy of various bad guys, ranging from terrorists to aliens to robots to the all-powerful supervillain. Does he have a set of power-armor that’s magic proof? Only gameplay can tell.
Doctor Strange

Any dealings with supernatural forces demand an appearance from the Sorcerer Supreme himself, Doctor Strange. As of now, it’s unknown just how much of a magical powerhouse he’ll be in the actual game, but he’s sure to be an extremely valuable ally if his exploits are to be believed. Having battled the forces of the Dark Dimension on a regular basis, to say very little scares the good doctor wouldn’t be far from the truth.
Wolverine

When most fans hear the words “X-Men,” their thoughts typically go to Wolverine. Every team of superheroes needs its muscle or loose-cannon character, and Wolverine has that covered in more ways than one. Since it’s nearly-impossible to take down this clawed mutant, no monster stands a chance when locked in combat with him. It’s safe to say that Wolverine will rip, tear, and mutilate his way through anything that gets in his way.

Here’s where the character roster starts to get a little obscure, as this isn’t the Johnny Blaze variation most Marvel fans already know. In short, Robbie Reyes is a different host for the Spirit of Vengeance with a killer set of wheels. While he still maintains some familiar powers seen with his motorcycle-riding counterpart, such as the chain whips and Penance Stare, his ride of choice is a monstrous muscle car with a “Hell” of a reputation. Needless to say, damage will definitely be this guy’s specialty
Magik

When it comes to a home team advantage, Illyana Rasputin has it locked down. Half mutant, half magic-user, and former apprentice of Mephisto himself, Magik is more than educated in the infernal arts. While she is not the experienced practitioner that Doctor Strange might be, she does possess more knowledge about the enemies at hand. She will definitely be one of the game’s many spellcaster characters, but she also might be extremely integral to the overall storyline.

If there are monsters that need slaying in the Marvel Multiverse, Blade’s the vamp for the job. Armed with an arsenal of weapons for the legions of darkness and well-versed in the ways of their world, Blade will be an essential player to this new adventure. The Daywalker is packing more than enough tools of the monster-slaying trade to combat Lilith and her unholy legions. If he can handle bloodsuckers, he can take on demons with just as much style.
Nico Minoru

Known as “Sister Grimm” in Marvel’s Runaways, Nico Minoru is set up as the game’s healer class, but not without a powerhouse of magic spells to keep her in the game. Armed with a magical staff capable of performing dark rituals, Nico is a spellcaster with a dark edge to offset her support status. Not quite the infernal-fueled caster Magik is, but one that will definitely serve the team well with a powerful punch.