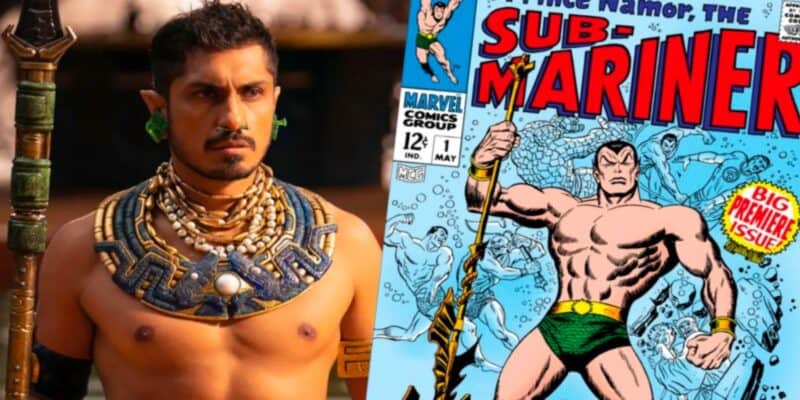 Wakanda Forever has brought fans back to the shining city of technological wonders and African royalty, but its most interesting new addition is the introduction of Namor the Submariner. While viewers were undoubtedly wowed and impressed as Namor and his aquatic forces rose from the depths, comic book fans know that the version on-screen looks nothing like his comic book counterpart, and why that’s the best thing for the character.

At first glance, Namor might look like the Marvel Multiverse’s answer to DC’s Aquaman. While Marvel’s ruler of Atlantis premiered years prior to DC’s king of the ocean, the two are actually quite different. While he might be the original aquatic superhero, the version seen in the Black Panther sequel is an immense upgrade compared to the version seen in the comics. In the film, Namor is a warrior, a king, and a godlike entity inspired by Aztec mythology and Mesoamerican cultures, but his original appearance left much to be desired.

Considered the first mutant of Marvel Comics, Namor walked/swam so the X-Men could run. Premiering in 1939, the Submariner was the mutant son of a fisherman and an Atlantean queen, Namor has been an ally, an antihero, an Invader, a Defender, and a regular player in Marvel’s cavalcade of heroes since he first hit the scene. However, many casual fans might be wondering why the character hasn’t seen much action outside the comics if he was such an influential figure. There are some that would argue most of the reasoning has to deal with the character’s complex background and his admittedly ridiculous design.

While the film version retains his pointed features and winged feet, Namor’s original appearance in the comic books was quite ridiculous in hindsight. Looking much more like a hybrid of Spock and Peter Pan in a green speedo, Namor didn’t exactly fit the image of Talokan’s K’uk’ulkan ruler seen in the film. Due to his portrayal in the panels and his location on the fringe of obscurity, many fans were undoubtedly surprised that the submariner received a live-action MCU portrayal at all. That all being said, Tenoch Huerta Mejía portrays a new and improved incarnation of the character that could even put Jason Mamoa’s Aquaman to shame.

While there are some purists out there who will undoubtedly take issue with Namor’s much-needed makeover, the version seen in the MCU is indeed a breath of fresh air for the character. Mejía gives a unique performance accompanied by a glow-up of mythic proportions, making him a magnificent addition to the MCU. Hopefully, fans can expect to see more of him in upcoming projects.

Are you a fan of Namor and his new look? Tell us in the comments below!