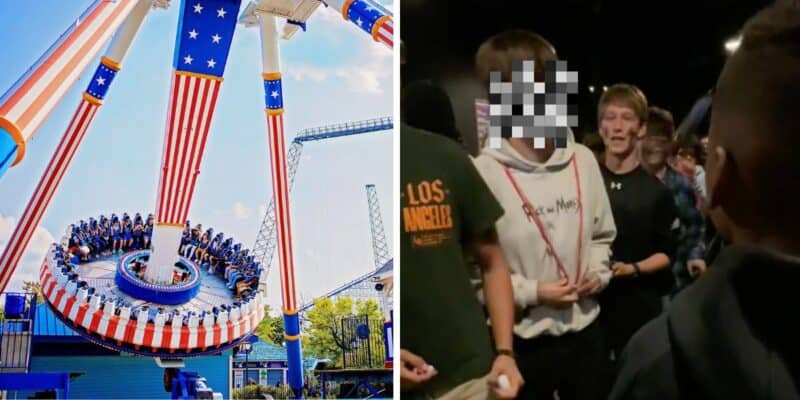 A mother is now speaking out and apologizing for her son’s potentially racist actions at a theme park.

Related: Most of Universal’s KidZone Closing for Good, Multiple Attractions Shutting Down

Guests visit theme parks to escape reality for the day or week, riding rides and experiencing some truly thrilling attractions. From Universal Studios and Walt Disney World to Knott’s Berry Farm and SeaWorld, no matter where Guests visit, they are sure to have a good time.

Unfortunately, not all Guests follow the rules or treat others with respect, which is exactly what happened a major theme park recently. In October, a video went viral on TikTok, showing what appears to be several teenage Guests walking around in blackface at a Six Flags theme park.

The teen allegedly wearing the Blackface costume was eventually identified on TikTok and Instagram but has deleted all social media accounts.

The teens drew tons of criticism for their actions, and now, the mother of one of them is publicly apologizing but says the incident was a misunderstanding.

The mother claimed that her son and other boys used “eye black sport makeup” to paint their faces to look like “zombies” once inside the theme park.

“We offer our sincerest apologies to anyone that was hurt by the misleading actions in the video,” the mother said. “As a result of the occurrence at Six Flags on Oct. 9, I feel the need as a mother to clarify a few points regarding my child. He did not paint his face to be offensive, he is not racist, and he did not Airdrop any racist memes.”

The mother stated that her son was “unaware that his face paint could be considered offensive and washed it off as soon as he found out that it was.”

The mother said her son has received death threats following the incident and is no longer attending high school in person. A Six Flags spokeswoman stated that the park does not allow anyone over the age of 12 to wear face paint once inside.

“The guests pictured in the video you reference did not enter the park wearing face makeup, which we were able to verify through our front gate camera system,” said spokeswoman Rachel Kendziora.

The mother said the incident has “spiraled out of control” since going viral, saying that her and her family are “absolutely not racist. It was inconsiderate but not intentional, and he is learning from his mistakes.

Stay tuned here at Inside the Magic for further updates on this story.

Comments Off on “We Are Not Racist,” Mom Apologizes For Son’s Offensive Stunt at Theme Park