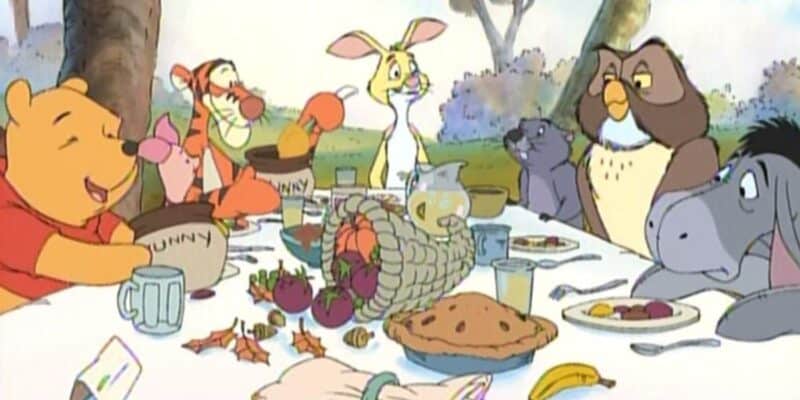 From New Year’s to Christmas, Winnie the Pooh and the rest of Christopher Robin’s plush pals have a special for all the core holidays. However, while that turkey might be roasting and the pumpkin pie might be chilling out in the fridge, fans looking to invite that willy-nilly, silly, old bear to their tables might be sadly disappointed.

A Winnie the Pooh Thanksgiving, as the title would allude, is a Thanksgiving special set in the Hundred Acre Wood. Airing on ABC in 1998, the special brought Pooh, Tigger, and all their friends to the dinner table for a gathering of friends and thankfulness. Any holiday about food is bound to get Pooh Bear’s attention, but when Rabbit tries to push for a “true” celebration with Turkey, cranberry sauce, and pumpkin pie, things start to take a bit of a strange turn as everyone goes overboard. While this all sounds like good, sweet, wholesome material for Winnie the Pooh, it hasn’t made it onto Disney’s magical streaming service. However, it can be found on YouTube for absolutely free!

Right out of the gate, the special hits the viewers right in the warm and cozy spots, with Pooh singing a song about being thankful and getting together with his friends. All is perfectly routine until Rabbit takes over and assigns the friends their Thanksgiving duties. Shortly after, Tigger and Eeyore are sent bouncing through the forest in search of cranberries, Pooh and Piglet try to trap a turkey, Owl is put in charge of the dishes, and Gopher bakes a rather explosive pumpkin pie. Of course, as with most plots involving miscommunications and too much of a good thing, the true reason of the season is lost in the chaos.

Fortunately for the friends, even after the well-meaning disaster of Rabbit’s traditional Thanksgiving, Pooh gets him and the rest of his friends to pull together for a celebration that might not be conventional, but it has all the love and thankfulness it could ever need. It’s sweet, sentimental, a little silly, and certainly everything viewers can expect from the many adventures of Winnie the Pooh, but like every Pooh production, it’s that right amount of wholesome sweetness to nail the viewers right in the heartstrings every single time.

Have you seen this forgotten special? Tell us in the comments below!