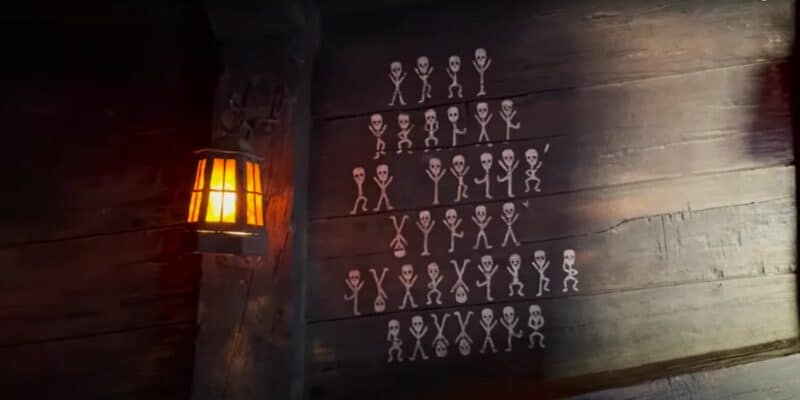 Did you know that there is a secret riddle hidden at Pirate’s Lair on Tom Sawyer Island at Disneyland? Neither did a lot of other Disney fans, including Chris Provost.

Provost has a YouTube channel called Provost Park Pass, where he shares secrets and tips at Disneyland and California Adventure. And recently, with the help of some YouTube commenters, he was able to solve a long-standing riddle.

A recent SFGate article described this fascinating journey to find the answer to a 15-year-old riddle.

Provost discovered this mysterious riddle at Pirate’s Lair on Tom Sawyer Island. This is not typically a busy location, so it’s understandable how the riddle could have gone unnoticed for so long.

Provost is no stranger to Disney secrets, as he usually films secret spots at Disneyland for his YouTube channel. However, earlier this year, as he was filming at Pirate’s Lair, he panned over a painting of dancing skeletons on the wall. He ignored it at first, assuming it was just a decorative part of the Lair.

However, a YouTube commenter noticed that this was some kind of code, and someone else remarked that it looked similar to a code in a Sherlock Holmes story “The Adventure of the Dancing Men.”

Sure enough, once Provost followed this lead, the skeletons lined up perfectly, which then allowed him to be able to decipher the message. The decrypted code read, “Each answer be havin’ three identical letters.” To Provost, the word “each” implied more than one, meaning more than one riddle. However, he was only ever able to find the one riddle within Pirate’s Lair.

Next, Provost remembered a riddle etched into a wall at Dead Man’s Grotto on Tom Sawyer Island. However, it has been closed for a few months due to electrical issues. So, pulling footage from a previous video, Provost shows us where to find the message. After you enter the grotto and see the glowing treasure chest, go around the corner, and you can spot the message on the wall. Provost had noticed this before but didn’t think anything of it, but now we see that it’s part of the dancing skeleton riddle.

The message on the wall reads: “We pirates face a sea of troubles. Our dying breaths are only…” and then it trails off. Assuming this message is meant to rhyme, the missing ending is “bubbles.”

And, if we go back to the original deciphered message, we’re looking for an answer with three identical letters. The word “Bubbles” has three b’s, meaning this must be the answer to the riddle!

As exciting as this riddle journey was, Provost could only find that one riddle within Pirate’s Lair at Disneyland. He thought that maybe Disney planned to include more to the riddle in 2007 as Tom Sawyer Island was renovated, perhaps to add more pirate imagery as a nod to the Pirates of the Caribbean movie franchise. But, sadly, all that visibly remained was the wordplay and dancing skeleton code.

You can follow along this detective journey with Chris Provost in the video below:

What do you think of this riddle? Do you think there is more to it than meets the eye? Tell us in the comments!