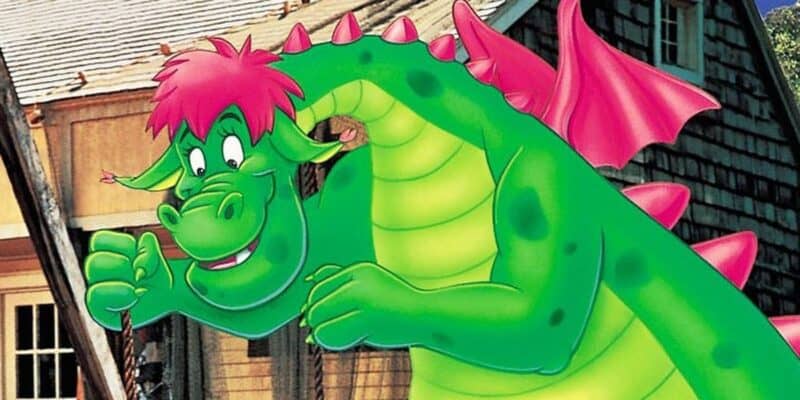 Pete’s Dragon was one of Disney’s most ambitious and impressive movie musicals when it first premiered. Now that 45 years have passed since viewers were first taken to Passamaquoddy and its iconic lighthouse, does the film still glow like a candle on the water?

The ’70s were an interesting time for Walt Disney Pictures. After the death of the studio’s founder and figurehead in 1966, the company had a rocky time trying to find its footing without Walt’s involvement. However, Pete’s Dragon was something of a return to form. In a way, it’s a movie that hits nearly every Disney cliche in the book, but that’s not necessarily a bad thing. To an extent, the film took many elements from films like Mary Poppins and Bedknobs and Broomsticks to create something that felt like one of Walt’s original productions, including exceptional work on Eliot from animation legend, Don Bluth.

Released November 4th of 1977, the film concerns the titular Pete, a runaway orphan adopted by the abusive Gogan clan, his large, green dragon named Eliot, and their adventures on the run in the little village of Passamaquoddy. Featuring a bevy of stars of stage and screen including Helen Reddy, Mickey Rooney, Red Buttons, and Shelley Winters, the production had quite a supply of talent behind it. Not only did it feature impressive green screen effects for 1977, but it received an Oscar nomination for Helen Reddy’s “Candle on the Water” at the academy awards. Since then, the characters of Eliot and Pete have been seen in and out of the Disney Parks, most notably as a parade float and the face of the original Main Street Electrical Parade.

While the film received a lukewarm remake in 2016, a far cry away from the zany musical that inspired it, Pete’s Dragon still remains a campy classic 45 years later. It might not be on every Disney buff’s radar, but hardcore fans of the mouse house know just how infectious the film can be.

Where else can viewers watch an animated dragon chase off Shelley Winters, a Drunk Mickey Rooney burst into a big musical number, and hear a song about the health benefits of dragon’s liver? In short, it’s truly an underrated gem that more fans should see. Come for the big, green dragon, stay for the delightfully delirious musical.

Have you seen Pete’s Dragon? Tell us in the comments below!