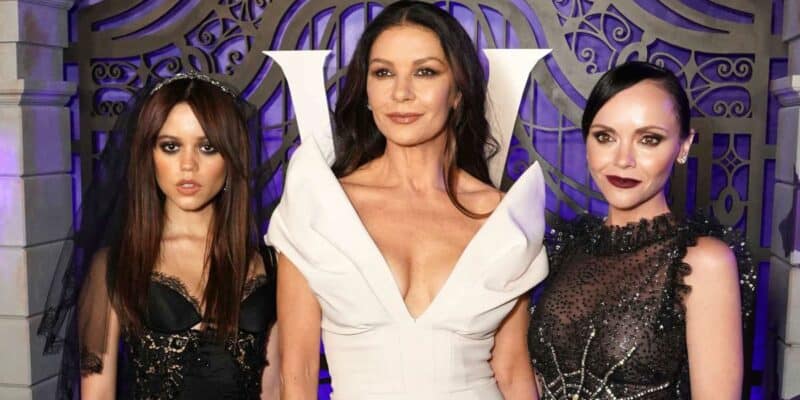 “They’re creepy and they’re kooky. Mysterious and spooky. They’re all together ooky.” *snap snap* Wednesday Addams is back.

Jenna Ortega stars as teen Wednesday Addams, an ‘Addams Family’ regular forced to go to a boarding school with outcasts, in Netflix’s Wednesday.

Executive producer, Tim Burton, has reintroduced The Addams Family. But this time, it’s all about Wednesday.

The series centers on a teenage Wednesday (Jenna Ortega) trying to solve many mysteries, one being how to cement her identity outside the shadow of her ever-glamorous mother, Morticia (Catherine Zeta-Jones).

Wednesday is also tasked with harnessing her budding psychic ability to solve a serial killer case at Nevermore Academy and cracking a murder mystery that involved her parents 25 years ago.

In the first episode, after a rather nasty incident with some piranha, Wednesday gets expelled from school, and must now attend Nevermore Academy.

There she meets her new roommate, Enid (Emma Meyers). After introductions, Enid is told that Wednesday is allergic to color. Asking what that means, Wednesday, deadpan, says “I break out into hives, and the flesh peels off my bones.”

The Addams Family has been around since the 1930s where it started as a comic strip by Charles Addams’.

Since then, there has been a sitcom which started in the 1960s, along with two movies in the 1990s.

The Wednesday Addams most of us grew up watching (Christina Ricci) will also be in this new series.

“She’s a truth-teller. She’ll say the things everybody else wants to say, and she can get away with it,” says Alfred Gough, who created the new show with Miles Millar.

Burton was drawn to a coming-of-age story told through Wednesday’s black-and-white perspective. “I was a teenage boy version of that myself,” says the filmmaker, who also directed four of the eight episodes.

“Honestly, all those weird feelings kept flooding back to me of being in school and teachers and society and all that stuff.” (A water polo scene in the pilot episode was borrowed from Burton’s childhood).

So, put a witch’s shawl on. A broomstick you can crawl on. We’re gonna pay a call on, The Addams Family.