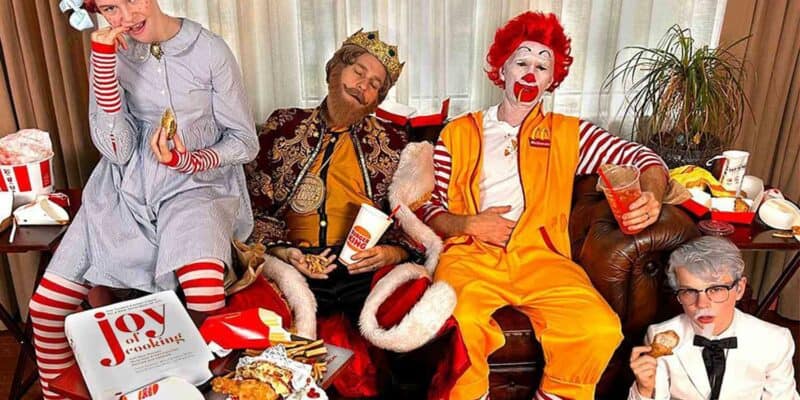 Neil Patrick Harris, his husband David Burtka, and his twins have done it again.

NPH (How I Met Your Mother (Barney Stinson) and A Series of Unfortunate Events (Count Olaf)) along with his husband David Burtka, and twins Gideon and Harper Grace always celebrate Halloween in style.

This year is no different.

With Harris joining the ranks of Doctor Who, it was a solid guess that the family would be dressing up this year as some beloved Doctors, or maybe a Dalek or two.

This year, their Halloween costumes ended up being fast-food mascots.

He wrote: “Trick or Meat. Happy Halloween from the BOOrtka-Harris Family.”

David went as Burger King, Neil as Ronald McDonald, Harper as Wendy Thomas, and Gideon as Colonel Harland Sanders. The twins’ costumes are actually based off of real people that inspired the fast-food chains: Dave Thomas’ fourth daughter Wendy and Colonel Harland Sanders, the creator and face of Kentucky Fried Chicken.

In addition to their costumes, the photo was taken in a living room setting, complete with fast-food wrappers and food thrown everywhere.

As Harris says, you can see some behind-the-scenes photos on his husband’s Instagram. They show the photoshoot taking place, and even a half-ready Ronald McDonald (NPH) applying makeup to Burtka’s Burger King costume.

This family of four has always taken Halloween very seriously and have the best time doing so. Throughout the years they can be seen as Willy Wonka and the Chocolate Factory characters, famous movie stars from the Golden Age, and even as early as last year- horror movie characters.

Earlier this month, the twins celebrated their ‘golden birthday’ as the turned 12 on October 12th.

What did you dress up as for Halloween? Let us know in the comments and show us some pictures!