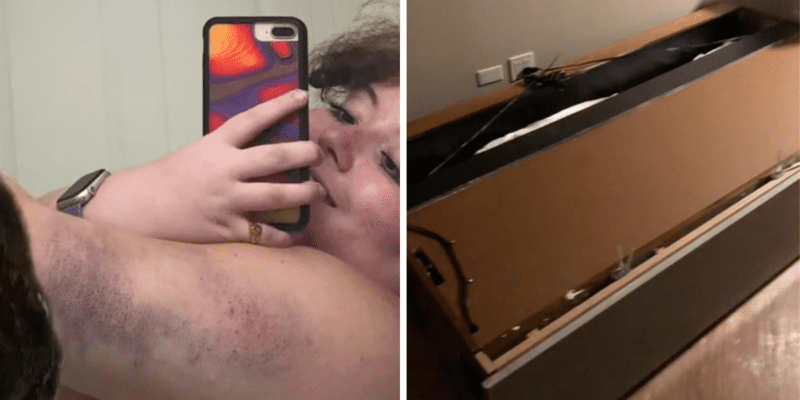 the sound of the wood ripping, the pain in my arm stuck underneath, the room being pitch black and the way i was screaming pHEWWW trauma #fyp

In it, she claimed that a 600-pound pull-out bed fell on her while she slept at the Disney Resort. Later, Sara uploaded an explanation:

Sara explained that her family had visited Walt Disney World Resort multiple times a year for decades. Their February 2022 trip was an ordinary vacation, and Sara chose to sleep on the fold-down bed as she usually did.

In the middle of the night, Sara woke up to the sound of wood ripping out of the wall. It was too late for her to react, and the bed collapsed onto the floor with Sara trapped inside it.

“I knew I wasn’t going to be able to scream unless I got out, so with adrenaline, I ripped my head and my chest out,” Sara recalled. “The whole thing came collapsing back down on my right arm. Adrenaline kicked in. It hurt so bad, but I needed to scream.”

Sara thought her arm might have been ripped open, but she got away with some heavy bruising and a hematoma on her right arm. She also shared a picture of the bed before and after the collapse and her injuries.

Many told Sara to sue, but she said a lawyer told the family they didn’t have enough of a case. Walt Disney World Resort offered the family free FastPasses, a partial room credit, and a few hard-to-get dining reservations.

While many commenters told Sara that the trundle beds attached to the wall are for children, she maintained that the Internet is full of misleading information about the beds. She claimed to have slept in them without issue on multiple visits since she was 13. She’s now 20.

The Walt Disney World Resort website does not state a weight limit for the trundle beds. However, when a similar incident occurred at Disney’s Rivera Resort in 2019, a Disney representative told Inside the Magic that the beds are recommended for Guests nine and under and have a posted weight limit of 200 pounds.

This Disney Vacation Club (DVC) Resort is a Deluxe, luxurious experience that Guests of all ages are sure to enjoy. From Disney:

Have you ever slept on a pull-out bed at a Walt Disney World Resort hotel?