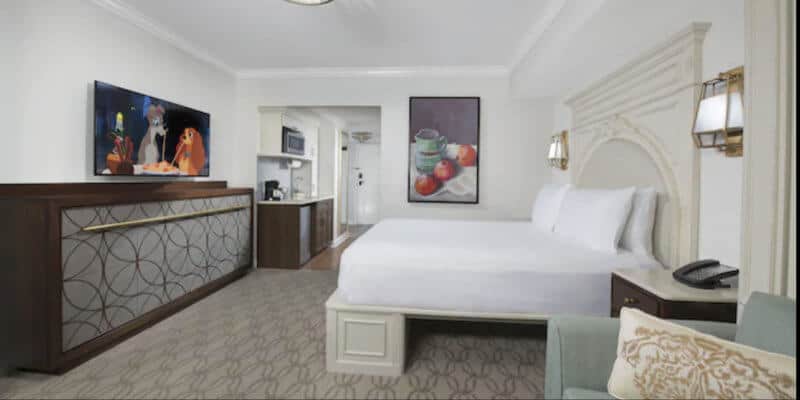 Disney has confirmed the accident involving the new trundle beds at Disney’s Riviera Resort falling on top of a guest did, in fact, occur this past Monday night.

According to Spectrum News, a Disney spokesperson said an installation problem caused an issue with the bed. Disney is now undergoing checks of similar beds at the resort and making adjustments if needed. The pull-down beds are the ones located under the flat-panel TVs in the rooms. Disney is also relocating guests if needed for their “safety and comfort”.

We are seeing reports online that Disney has added a notice to guests staying at Disney’s Riviera Resort to not use the brand-new pull-down “trundle” beds . This warning comes shortly after reports of a bed supposedly falling off the wall and landing on a guest shortly after the resort opening. The resort had its grand opening December 16, 2019.

Twitter user @Crusisingthepark shared a photo of the notice:

After a trundle bed completely fell off the wall at Disney’s Riviera Resort, Disney has placed notices on all trundle beds installed at the newly open Riviera Resort taking them out of service. pic.twitter.com/Q77tvDK7yd

“We apologize for the inconvenience. This trundle bed is out of order and for your safety, it cannot be used at this time. We want to ensure your stay is as comfortable as possible. If you planned to use this bed, please contact the Front Desk so alternative arrangements can be provided.”

The guest involved in the accident shared a photo of a fallen bed on a Disney Facebook group claiming she heard a loud noise in the middle of the night that woke her up to see the trundle bed had fallen off the wall and on top of her mother. She also noted the bed was heavy and that it took her and her sister to lift it to help their mother from underneath it. They alerted Guest Services at Disney’s Riviera Resort where they were staying, which offered to call 911. They declined since the injured guest was apparently only bruised and scratched, according to the post. The post and picture has since been widely circulated on social media.

Similar beds are offered in other resorts on property. Some rooms at Disney’s Port Orleans Riverside Resort also offer a trundle bed. On them, there is a weight limit specified, indicating they can accommodate up to 200lbs. However, we do not have any details or confirmation regarding the new trundle beds at Disney’s Riviera Resort and if they also have any similar precautions posted on them; nor if the guests that say they experienced the incident were aware of a weight limit.

Disney has yet to make any official statement regarding the accident. The notices could simply be out of an abundance of caution. Nevertheless, it is clear that guest safety is top priority for Disney.

We will continue sharing details as we learn more about this incident at the Disney’s new Riviera Resort hotel and any pertinent updates about the status of the trundle beds at this resort.