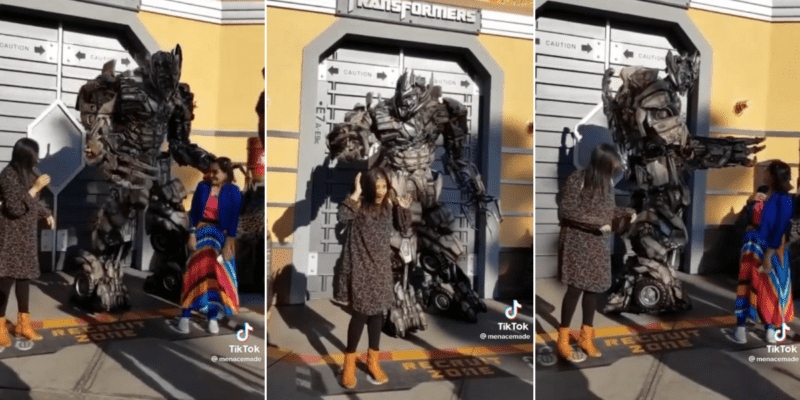 A couple of Guests had a hilarious interaction with Megatron at Universal Studios Hollywood, where the character tried to recruit them.

When visiting Universal Studios Hollywood, Guests can meet some of their favorite characters like Gru and The Minions, Shrek, Donkey, Princess Fiona, Homer Simpson, Krusty the Clown, and many more. But perhaps some of the most entertaining interactions take place in the California theme park’s Lower Lot, where they can meet dinosaurs from Jurassic World, mummies and Egyptian deities near Revenge of the Mummy – The Ride, and characters from the Transformers franchise like Optimus Prime, Bumblebee, and Megatron near TRANSFORMERS: The Ride-3D.

Megatron stole the show during a hilarious interaction with a couple of Guests dressed as complete opposites, one with a brightly colored outfit and the other wearing more muted colors despite wearing an animal print dress. Megatron immediately started to talk about the Guest in the colorful outfit, commenting he hadn’t ordered a rainbow, telling her, “Explain yourself, rainbow! Produce the Skittles! Show me now!” making her and all Guests around the scene burst out, laughing.

The laughter continued as Megatron expressed his shock after learning the Guest was not a rainbow and asked her if she had “powers of prismatic delight, refracting the sun’s rays into lasers to blind the optics of the Autobots,” as that is what the leader of the Decepticons was after. Megatron was pleased to hear the Guest agreeing, saying she would be of use to him, unlike the other woman “wearing this cheetah robe.”

The final moments of the interaction became the frosting on the cake, as Megatron yelled he didn’t care the Guests were from England after one of them brought it up and that he didn’t care about England. “I am from Cybertron, the greatest planet in the galaxy,” said the leader of the Decepticons before sending the Guests “back across the pond” as they continued to laugh.

The video has gathered over 697k likes and 5K comments since it was originally posted, with most of its viewers praising the character’s performance during the hilarious interaction.

Have you had a memorable character interaction at Universal Studios Hollywood or Universal Orlando Resort? Tell us about it in the comments below!