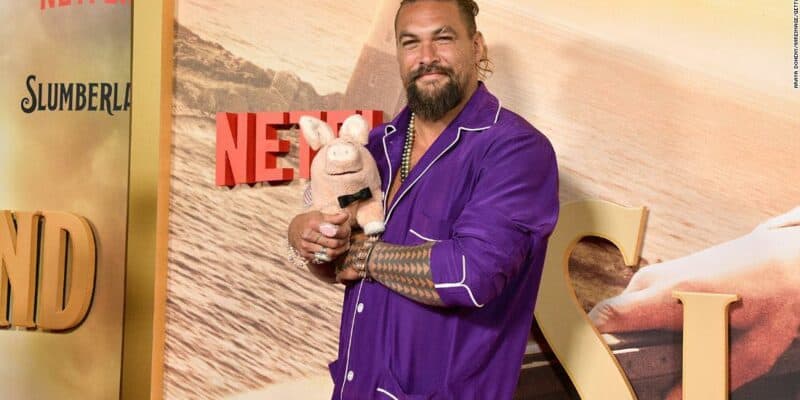 Jason Momoa is no stranger to making headlines.

On Wednesday, Jason Momoa took his daughters to see the new movie, Slumberland. And apparently, he brought along a plus one in the form of a stuffed pig.

Momoa posed for pictures on the red carpet with his new furry friend and even held onto it during interviews. Surprisingly, this isn’t the first time he has brought a stuffed animal to a movie premiere. Back in 2011, he brought a teddy bear to the premiere of “Conan the Barbarian.”

The 43-year-old actor rose to fame playing Khal Drogo on HBO’s Game of Thrones. Since then, he’s starred in DC’s Aquaman and will soon be appearing in the highly anticipated sequel, Aquaman 2.

He’s also set to star in the upcoming movie Dune.

So why did he bring a stuffed pig? Well, it’s because he couldn’t bring his actual pig.

Yes, Momoa adopted a wild boar while he was on set for Slumberland.

In Slumberland, Momoa plays an eccentric outlaw named Flip, who guides a young orphan (Marlow Barkley) and her toy-pig-turned-real through a world of dreams.

“This is why I can’t work with animals. I want to bring them home. Wild and feral like his pops,” he wrote on Instagram alongside a video of him and the pig, which he ultimately called Manapua.

In the sweet video, the Game of Thrones actor asked Manapua if he wanted to be his plus one at the “Slumberland” premiere.

Will you be tuning in to Netflix to watch Slumberland on November 18th?