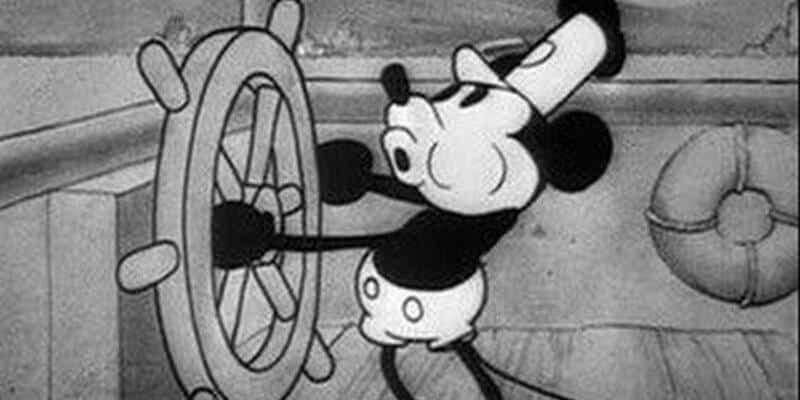 Steamboat Willie debuted on November 18th, 1928. It was the first synchronized sound cartoon for Walt Disney. Two other silent shorts were created before this one but were never picked up by distributors.

Because of its overnight success, it is considered the debut of Mickey Mouse, although it is technically the third Mickey short to be released. The other two were Plane Crazy and The Gallopin’ Gaucho.

We actually have Universal Pictures to thank for our favorite mouse. Mickey was created as a replacement for Oswald the Lucky Rabbit when Mintz (Winkler Pictures) refused to give Oswald back to Walt.

And we can thank Walt’s wife, Lillian, for not having to call Mickey Mortimer. Granted, we do see Mortimer pop up a few times in the Mickey universe.

Disney was eventually able to get Oswald back.

In 2006, after roughly 78 years, Disney was able to get the rights to Oswald back.

It’s funny to think that Bob Iger traded an actual person (Sportscaster Al Michaels) to get Walt Disney’s original creation back. Imagine being that guy!

Mickey Mouse has helped shape our lives for over 90 years.

What started as a series of animated short films, grew into not only full-length feature films, but an entire franchise including theme parks all around the world.

Related: Disney is Slowly Taking Over the World

Mickey Mouse and the Walt Disney Company have become a household name all over the world.

To celebrate Mickey (and Minnie’s) 94th birthday, the Walt Disney Studio is releasing “Mickey: The Story of a Mouse“ today on Disney+.

The film will focus on Mickey Mouse’s rise to stardom and his impact on Walt Disney’s career in animation since the late 1920s.