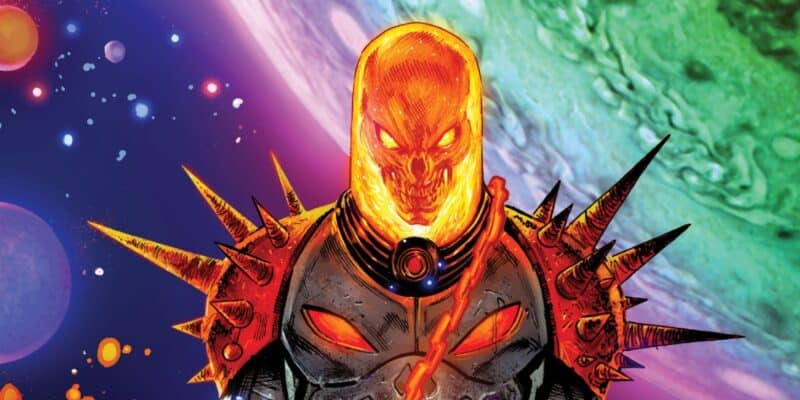 While most Marvel fans might be familiar with Johnny Blaze and his fiery motorcycle or Robbie Reyes and his Hell Charger, they might be sleeping on a much more bombastic and delightfully ludicrous adaptation of the Spirit of Vengeance. Making his Marvel debut in 2018, the Cosmic Ghost Rider was a sensational space specter that fans devoured, now he’s back in action in an all-new series.

While he might look like a Doom 64 reject, this futuristic version of Frank Castle, better known in most circles as the Punisher, packs major quantities of heat. This follow-up to the 2018 run by Dylan Burnett and Donny Cates sees Castle seeking solace at the farthest reaches of the galaxy, his Ghost Rider days behind him. However, when a dangerous bounty hunter starts leaving a trail of blood and bodies across the stars, he must suit up once more with the Spirit of Vengeance to take on a much more personal threat, himself. The new run is being penned by Rogue and Gambit writer, Stephanie Phillips, and hits the shelves this coming March.

Introduced in 2018 in Donny Cates’ Thanos series, Frank Castle became the new Ghost Rider after selling his soul to Mephisto when the mad titan destroyed the entirety of the Avengers team on Earth (as one does). While he roamed the wastelands as the new Rider for a period of time, his biggest target was Thanos himself, so his travels took him off-world in search of the being who destroyed his planet.

Adventures facing off with the heralds of Galactus, time travel, and a new set of Guardians of the Galaxy are enough to drive most comic characters to the brink of madness, including someone like Frank Castle. Now as the Cosmic Ghost Rider, he comes equipped with a much more witty and comedic look on life, almost in an unholy hybrid of Joker and Deadpool. It’s definitely a new take on a familiar character, but the best way to properly understand it is to take a dive into the completed first series.

March 2023 will see Castle and his flaming fiendish persona riding off once more, and fans can certainly expect even more outlandish adventures. Until then, fans still have Cates and Burnett’s debut series to get them up to speed. By the time the new issue drops, fans of Marvel’s new hellish antihero will have a lot to talk about.

Have you read Cosmic Ghost Rider? Tell us in the comments below!