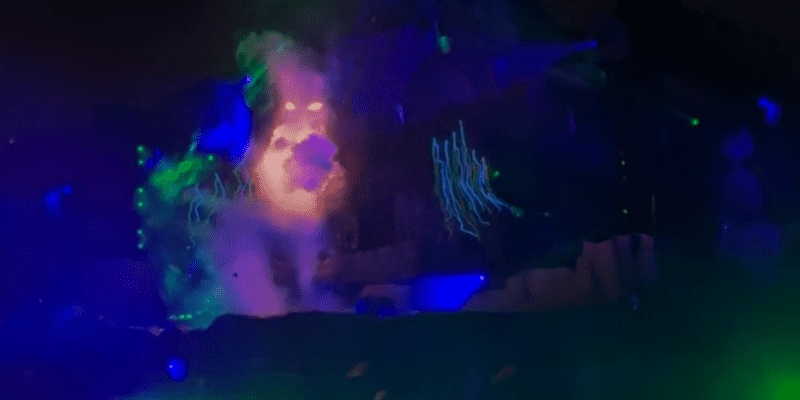 Walt Disney World Resort is known as “The Most Magical Place On Earth” because it is the place where dreams come true.

You can visit Magic Kingdom, EPCOT, Disney’s Animal Kingdom, and Disney’s Hollywood Studios and enjoy many amazing attractions and rides.

Some of the most magical experiences for Disney Park Guests come at the end of the night with epic nighttime spectaculars. Guests can enjoy Disney Enchantment– which is soon to be changed to Happily Ever After— at Magic Kingdom, and Harmonious at EPCOT.

Just recently, Disney brought back Fantasmic! at Disney’s Hollywood Studios and it has been a huge hit for fans. Disney World Guests have lined up outside the amphitheater for the chance to see the beloved show back in action after more than two years away.

However, there was a bit of malfunction during a recent showing of the popular nighttime spectacular.

A Guest who was in attendance for the 7:30 p.m. performance of the show on Saturday said that they witnessed a woman in the crowd hit by a dragon firework.

Dragon firework hits woman in crowd during Fantasmic!! from WaltDisneyWorld

In the video, you can see the black object fly from the dragon and into the crowd after the explosion.

Several others in the social media thread explained that this was casing from the firework, made of paper.

“That’s just the paper covering from the shell. Most of the time they survive the launch, but burn up when the shell explodes at altitude,” a pyrotechnic not affiliated with Disney shared. “This style of shell is different as it doesn’t do anything besides catch fire on the water, so the paper stays intact if it doesn’t hit the water. As long as she wasn’t staring wide eyed at it it wouldn’t hurt more than just getting a piece of paper blown into your face by the wind.”

It’s important to remember that this incident has not been confirmed by Disney and is based on an account from a Guest. It’s also important to note that Walt Disney World Resort has safety measures in place to make sure that Guests are protected and Disney Cast Members are expertly-trained to handle situations as they arise.

Fantasmic! is described as “A Legendary Tale.” Featuring stunning effects, thrilling stunts, dazzling pyrotechnics and rousing music, this larger-than-life show is painted on a grand canvas of dancing water and light. Overflowing with silly and suspenseful surprises, it will leave your entire family smiling from ear-to-ear!