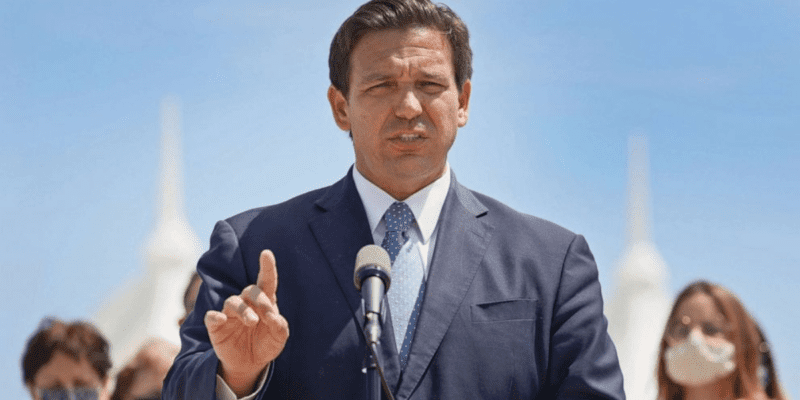 Florida Governor Ron DeSantis may have a closer relationship with Disney than he’d like to admit despite the heated conflict between the two.

It is no secret that Florida Governor Ronald Dion DeSantis has a less-than-friendly relationship with The Walt Disney Company, with the politician constantly boasting about his retaliation against Disney for opposing his Parental Rights in Education Act, or the “Don’t Say Gay Bill” as it is commonly known.

However, DeSantis has failed to mention a magical detail about his life. Long before Disney became what he derides as a “woke corporation,” the Most Magical Place on Earth was the venue where he once said his “I Do’s.”

As reported by Yahoo News, DeSantis exchanged wedding vows with his wife Casey DeSantis, whose maiden name was Black, dressed in his white, decorated Naval uniform, at the Grand Floridian’s wedding pavilion, a chapel with arched windows overlooking Cinderella Castle and the Seven Seas Lagoon. The event’s reception was held at EPCOT’s Italy Isola in a nod to the couple’s Italian heritage.

The Florida Governor, who is viewed as a lock for reelection on November 8, has been the subject of high-profile feature stories as he ascends the ranks of the Republican Party, becoming a favorite for the 2024 presidential nomination just behind former President Donald Trump.

However, details of the DeSantis’ Disney wedding haven’t previously been reported. An estimated 150 Guests attended the DeSantis’ wedding on September 26, 2009, and three people confirmed the location to Insider while recently reporting a story about Casey DeSantis.

The Florida Governor posted a picture with his wife, wishing her a happy anniversary earlier this year. However, the wedding venue cannot be seen in the image shared.

Happy Anniversary to my beautiful wife, @CaseyDeSantis! I am so thankful for our marriage every day, you are an amazing wife, mother and friend. Love you so much!

Happy Anniversary to my beautiful wife, @CaseyDeSantis! I am so thankful for our marriage every day, you are an amazing wife, mother and friend. Love you so much! pic.twitter.com/uxbOGFGxqe

The choice of venue surprised one of the former friends and colleagues of the Florida first lady, who spoke on condition of anonymity, as she was “not really a Disney person,” but said that Casey DeSantis “wanted something all-inclusive and put together.” The ceremony was officiated by Philip Rogers, a Catholic priest from Ohio, as shown in a copy of the couple’s marriage license.

The marriage license lists the wedding location as Lake Buena Vista, Florida, which is the mailing address for Disney World and is a city in Orange County. The location of the governor’s wedding doesn’t appear to be widely known, even among some of his former aides.

Michael Binder, director of the Public Opinion Research Lab at the University of North Florida, told Insider that the news was “strange” and “super funny” but added that DeSantis “is very tight-lipped about his personal life.” “It’s not like he’s got a mistress or he killed somebody, but I heard something today that surprised me,” Binder said.

Disney’s Wedding Pavillion, located at Disney’s Grand Floridian Resort & Spa in the Magic Kingdom area of Walt Disney World Resort, currently has a ceremony venue fee of $6,000 and an event minimum of $12,500 – $35,000.

Did you know of Governor DeSantis’ wedding venue? What do you think about this new information? Let us know in the comments below!