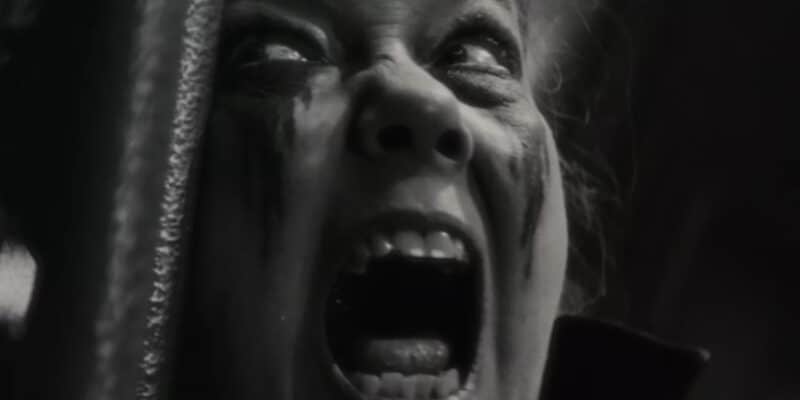 Werewolf By Night is a Marvel Movie that is literally made for Halloween, but it’s also surprisingly graphic and gory for something on Disney+. In spite of its gruesome visuals, it somehow manages to walk away with only a PG-Rating, though there might be a simple reason for that.

James A. Janise from Dead Meat makes a great observation in his Kill Count video on the film that the director, Michael Giacchino, wanted to shoot for a more mature rating. However, the use of a black-and-white lens somehow subdued the violence, in spite of all the graphic kills in the film. If this same project was shot completely in color, it would definitely be looking at a more Deadpool level of bloodshed. To say that there aren’t a few R-rated kills would be surprisingly untrue. Needless to say, the results are monstrous.

People are dismembered, burned alive, and impaled, and even the huntress, Azazel, has her face sliced open and gushing blood by Elsa Bloodstone during the climactic fight sequence. While this didn’t result in the more mature rating Giacchino wanted, it might be more in line with the classic monster movies of the 1930s than some viewers might believe. While films like Dracula, The Mummy, The Wolf Man, and so on might not be as scary now as they were then, the horror movies that existed before the invention of the Hayes Code got away with a lot more. Whether it was done intentionally or not, Marvel’s Werewolf By Night does almost the exact same thing.

Films like Universal’s The Black Cat and The Mummy had some surprisingly violent scenes, including a very graphic spear impalement during a flashback in the latter, but something about the absence of a crimson flow might be the reason they retain a mild rating. Marvel’s answer to The Wolf Man utilizes many techniques and practices established during the golden age of Horror, including its use of prosthetics and practical effects. Like the films that inspired it, the movie is rife with terror and spectacle seen through a grim and gothic point of view created through clever camera work. Despite the lack of color, the monochrome visuals created by the use of black-and-white film established the traditional palate that defined the genre.

Werewolf By Night has been called a great introductory horror film for younger viewers, and that isn’t an unfair assessment. The use of the MCU as a familiar setting and the black-and-white motifs to dial back the gore without sacrificing its use is a clever filmmaking technique that allows the studio to venture further in the horror genre. It might not be as shocking as Doctor Strange and the Multiverse of Madness, but it’s a surprisingly scary experience on Disney+.

Did Werewolf By Night scare you? Tell us in the comments below!

Comments Off on ‘Werewolf By Night’: Mutilations By Marvel