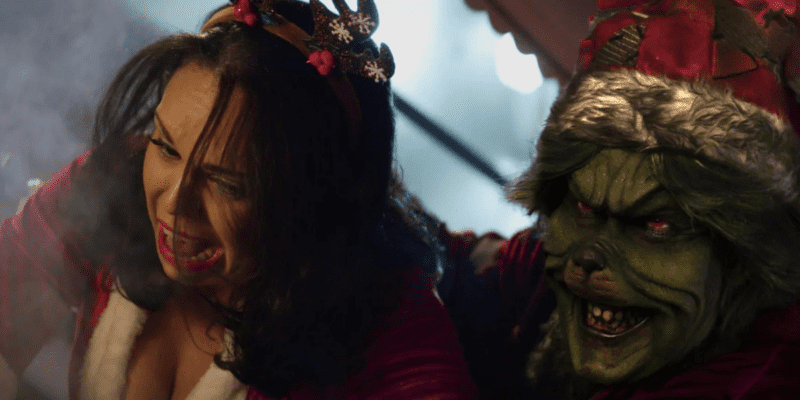 An R-rated version of How the Grinch Stole Christmas is set to premiere soon, taking the phrase “you’re a mean one” to a whole new level.

While many of us have fond memories of the mean green one from the Dr. Seuss book or the 2000 film adaptation, How the Grinch Stole Christmas, starring Jim Carrey, Taylor Momsen, Christine Baranski, and Jeffrey Tambor, an all-new project is set to hit screens this year, giving a bloody and violent twist to the beloved story of The Grinch.

From Director Steven LaMorte, The Mean One (2022) will be a horror adaptation of the famous story, starring David Howard Thornton — currently in 800+ cinemas as TERRIFIER 2’s Art the Clown — and Krystle Martin. The slasher parody is set to release everywhere in the United States on December 15, making the bizarre adaptation the perfect gift to horror fans this holiday season. XYZ Films, who picked up the release, has yet to reveal which streaming platform the film will launch.

The plot of this new gore film is relatively similar to the original storyline of How the Grinch Stole Christmas, regarding elements like the main character’s mountain home and his encounter with Cindy. However, the horror parody will obviously change some key aspects of the plot. Per Bloody Disgusting:

In the audacious new parody, The Mean One (David Howard Thornton) is a hairy, green-skinned grump in a Santa suit, living on a mountain high above the town of Newville, despising the holiday season. Young Cindy You-Know-Who (Krystle Martin), whose parents were butchered by The Mean One twenty Christmases earlier, is returning to town to seek closure… but is about to discover that this fiend with a heart two sizes to small is still quite eager to carve the roast beast.

XYZ Films’ Manager of Acquisitions and Development, Alex Williams, noted, “As a passionate fan of seasonal horror, The Mean One is exactly the kind of film that lands on my personal ‘nice list.’ This movie is a stunningly great time with a ferociously subversive turn from David Howard Thornton – and XYZ Films is so proud to be bringing this soon-to-be iconic Christmas slasher to audiences this holiday season.”

Pic is a co-production between A Sleight of Hand Productions, Amy Rose Productions, and Kali Pictures. Producers are Schumacher, LaMorte, and Martine Melloul. Executive producers are Jordan Rosner, Gato Scatena, and Zach Stampone.

Earlier this year, we heard of a violent R-rated Winnie the Pooh film in the works, similarly giving a violent twist to the story of the beloved characters from the Hundred Acre Wood. You can read more about that story by clicking here.

What do you think of this audacious take on The Grinch’s story? Let us know in the comments below!