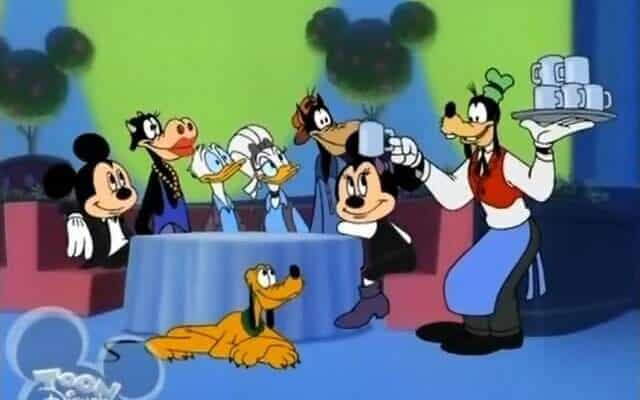 In the early 2000s, Disneyland and Walt Disney World weren’t the only places one could find all of the studio’s beloved animated characters in one location.

Disney’s House of Mouse was an animated series that brought together all of Disney’s best characters and stuffed them all under one roof where they could kick back, relax, grab a bite, and mingle with their peers. It was the only place other than a Disney Park where characters like Simba, Pooh, Tinkerbell, and the hippos from Fantasia could socialize with the likes of Cruella De Vil, the Pink Elephants, and the Cheshire Cat. While the show did have several original cartoons featuring Mickey, Donald, and Goofy from Mickey’s Mouse Works, the real meat of the series was watching the cast interact with each other as actors would off-set.

Eeyore did stand-up, Huey, Dewey, and Louie were the house band, and the evening was always sponsored by some Disney-cartoon-related business such as Mary Poppins’ Penguin Waiters or the Ink and Paint Club. But as wonderful as it would be to see the series drop onto Disney+ in its entirety, Disney should also consider updating the formula and giving it the Ducktales treatment.

Not only would a modern adaptation of the titular House of Mouse be the perfect platform for Disney to dish out a huge slice of fan service, but it would also give them the opportunity for both their classic and contemporary characters to collide. Imagine what would happen if someone like Nick Wilde shared a table with Jack Skellington, or if Doctor Facilier crossed paths with Mad Madam Mim. All of them could come back together for another evening of entertainment, perhaps with some new Mouseworks-esque shorts created by Paul Rudish, and the classic formula of the 2000s show could be revamped for a modern audience.

While it might sound like a take on Ralph Breaks the Internet on paper, there’s much more potential to this hypothetical project than meets the eye. It would truly be a chance for both Disney and their artists to further explore beloved characters and to breathe new life into older properties. Since it was all started by a mouse, the Walt Disney company would be nothing without its legion of beloved characters, and both the studio and the fans know that. With so many fans nostalgic for a pre-COVID Disney, both in and out of the parks, it’s high time they were reminded just how fun and entertaining those classic cartoons could be.

Would you watch a House of Mouse reboot? Tell us in the comments below!